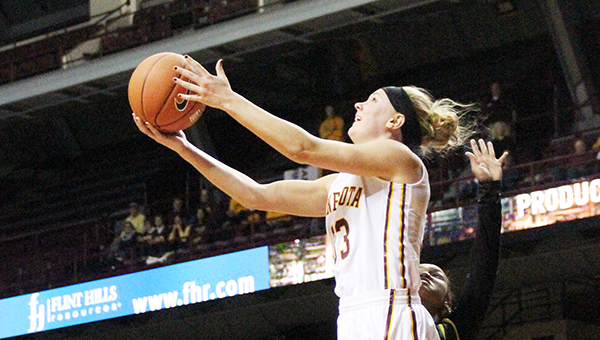 In fact, she was the first starter called to the floor in the team’s first game of the season Friday against Southeastern Louisiana.

“Reality struck me,” she said about being introduced as a Gopher in front of 3,879 fans at Williams Arena. “My heart was going crazy. I thought people could hear it.”

The Gophers won 109-60, the team’s first 100-plus-point game in 12 years and the first victory under new coach Marlene Stollings. The Gophers displayed improved fundamentals and a faster tempo.

Stollings said the team dedicates 25 minutes at each practice on fundamentals of the game and said she was pleased with the never-stop-running approach.

“We feel strongly about our first night performance,” she said.

Wagner made three out of eight shots, scoring 6 points. Stollings described the freshman as “an explosive player.”

“She is just getting her feet wet,” she said.

The coach called her “a tireless worker” and said Wagner earned the right to start.

Wagner, playing the off-guard position, did her signature slashing and cutting to the basket in scoring those points and said she was satisfied with her first college performance. Still, she hopes to do more driving to the bucket in coming games.

Wagner said the big difference between the high school game and the college level is the speed. High school is not fast compared to college and the players are not as big.

“In high school, I could muscle my way through,” she said.

Many fans came to see Wagner. When any player scored, fans cheered, but when Wagner missed, it was a way to tell how many people came to see just her because her fans groaned.

Mark Flom and three others came from Kenyon to watch Wagner’s first game as a Gopher. They had watched her New Richland-Hartland-Ellendale-Geneva Panthers team defeat their Kenyon-Wanamingo squad in recent years and enjoyed seeing her abilities.

Bill Howe’s five-person family drove up from Albert Lea. His wife, Ann, teaches special education for the NRHEG school district, but it is his eldest daughter, Mariah Howe, a first-grade teacher in St. Peter, who is the big Carlie Wagner fan.

“When you see somebody play good basketball, you want to watch them,” she said.

Kate Armon, 9, came from Blue Earth with family to see Wagner. She is a third-grader playing basketball on a fourth-grade team and looks up to Wagner and all the women’s basketball players. She had a basketball signed by Wagner and a shirt signed by senior Rachel Banham, who surpassed the 2,000-point mark Friday as a Golden Gopher.

Banham hails from Lakeville and had many fans rooting her on. People held up maroon and gold signs with the number 2,000 on them. Banham had 18 points Friday in beating the Lady Lions.

Paula Hansen and three others in her car came from New Richland. She lives about a mile away from the farm where Wagner grew up playing basketball against her older brothers. She said she has been going to Minnesota women’s basketball games in the past and will enjoy seeing her neighbor on the team.

She and Wagner had fans waiting to see the players after the game and get photographs and autographs.

Wagner said the NRHEG Panthers this season are a young team with a lot of punch and speed. She has two sisters on the team and predicts a deep postseason run.

“State is not out of the picture,” Wagner said. 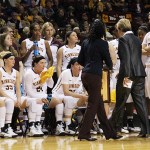 Minnesota players turn to listen to coach Marlene Stollings during their first game under her supervision. The team played with a faster pace than what fans had seen over the past 12 years. Tim Engstrom/Albert Lea Tribune 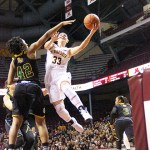 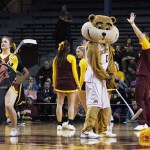 Goldie attempts to putt a pompom down the court Friday during the first Minnesota women’s basketball game of the season. Tim Engstrom/Albert Lea Tribune 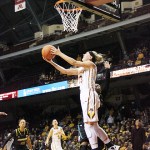 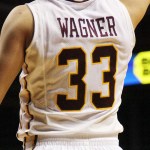 Carlie Wagner said she was thrilled to accomplish her dream of being a player for the Minnesota Golden Gophers. Tim Engstrom/Albert Lea Tribune 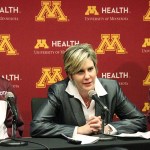 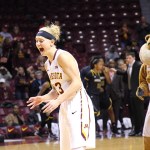 Carlie Wagner expresses excitement as she stands alone at center court Friday during the first Minnesota women’s basketball game of the season. She started her first game as a freshman and was the first starter introduced. Tim Engstrom/Albert Lea Tribune 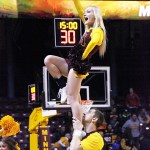