Casey Claire Rose Nielsen and Colin Edward O’Donnell, both of Minneapolis, were married at 4 p.m. Aug. 31, 2014, at Riley-Jacques Barn at Lake Riley in Eden Prairie. The ceremony was officiated by Paul Erdmann. A reception and wedding dance followed the ceremony at the barn. 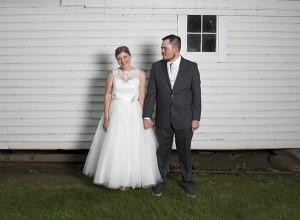 Casey is the daughter of Randy and Malinda Nielsen of Albert Lea.

Colin is the son of Ann Gallagher and Tim O’Donnell and Susan McCoy, all of Eden Prairie.

The bride is a graduate of the University of Minnesota, Twin Cities and is a behavioral therapist at Minnesota Autism Center in Eden Prairie.

The groom is a graduate of the University of Minnesota, Twin Cities and is a store leader for Bobby and Steve’s Auto World in Minneapolis.

Matron of honor was Hayley Grady, stepsister of the groom.

Best man was Alex Nielsen, brother of the bride.

Usher was Jeff Bryant of Albert Lea, friend of the couple.

Casey and Colin are grateful to everyone who played a role in their wedding by helping out before, during and after the big event. With a big move from Arizona to Minnesota just a few weeks before the wedding and another move shortly after, a wedding trip is still in the works.