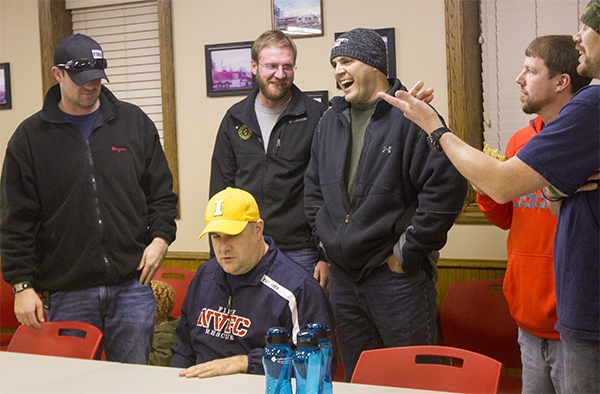 Volunteers with the Northwood Volunteer Fire & Rescue Company visit Thursday evening during an open house to showcase a $10,000 makeover awarded by California Casualty. The fire house got 30 chairs for the main level, 15 tables, four recliners and plates and other dinnerware for the kitchen. — Sarah Stultz/Albert Lea Tribune

NORTHWOOD — About a month ago, Northwood Volunteer Fire & Rescue Company’s Chief Rick Hanson sent out a message to all the members of the department asking them to attend a meeting. 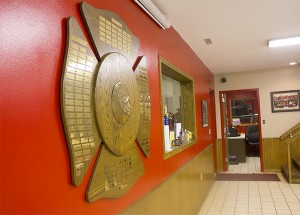 A few walls on the main level of the Northwood Volunteer Fire & Rescue Company building were painted red right before the announcement that the fire department had been chosen for a $10,000 makeover. The red matches new chairs that can now be used on that level. — Sarah Stultz/Albert Lea Tribune

There, Hanson and representatives with insurance company California Casualty announced the fire company had been chosen for a $10,000 makeover.

Community members got the chance to view the results of that makeover on Thursday at the station.

The award purchased 15 tables, 38 chairs, four recliners and new plates and silverware for the kitchen. The station’s previous tables and chairs had missing arms and exposed screws. 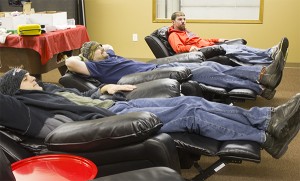 In addition to housing the fire and rescue company, the building is used for regular training sessions for the Worth County Sheriff’s Office and as a voting precinct in elections. About three meals are served out of the building’s kitchen per month.

Dan Low, a member of the department, said the fire company’s building, at 96 Eighth St. N., was constructed in the 1990s, and at that time was given used tables and chairs from an old restaurant in town.

The chairs and tables were not in the best condition, even at that time, he said.

Firefighter Ryan Severson, who is the department’s treasurer, said he thought of applying to the contest after the city was evacuated in February following an explosion and fire at Northwood AG Products fertilizer. He recognized the fire station could be a shelter and was probably in need of some updating.

Severson, whose father and brother have also served on the department, said the makeover replaced items that the company probably wouldn’t have been able to update otherwise.

It complemented a fresh coat of paint they had recently put on the walls. 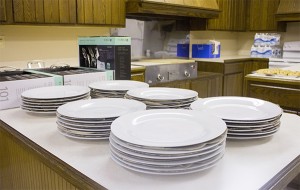 Part of the $10,000 makeover awarded to the Northwood Volunteer Fire & Rescue Company included new plates and silverware for the kitchen, which serves about three meals a month. — Sarah Stultz/Albert Lea Tribune

Hanson, who has volunteered for 32 years with the department — 22 as chief — said the department’s budget typically goes toward the purchase and maintenance of equipment.

“These are things we wouldn’t normally buy,” he said of the new tables and chairs. He said the firefighters cover 190 square miles, including automatic mutual aid to neighboring communities of Kensett and Grafton. It responds to about 60 fire calls and 500 medical calls a year.

He said the department’s budget goes toward the purchase and maintenance of equipment.

“As a fire department that relies solely on donations, this is particularly rewarding because it’s items they wouldn’t normally purchase for themselves,” Thornborrow said.

She said it was gratifying to give back to people who give so much of themselves.

The winner was selected randomly out of more than 10,000 applicants from across the country.

California Casualty is headquartered in San Mateo, Calif., and provides auto and home insurance to firefighters, law enforcement, educators and nurses across the country.