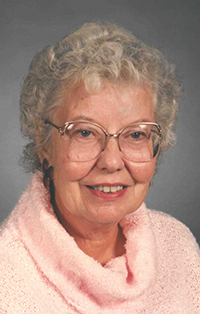 After her 1941 graduation from Preston High School, Pat attended Preston Normal School for teacher’s training. Her first teaching job was in a country school in the community of Granger, Fillmore County where she taught for one year. Pat then continued her education at Winona State University, graduating with a two-year teaching degree. Her next teaching job was at the elementary school in Harmony where she taught for two years before returning to Winona to continue studying for her Bachelor of Arts degree in teaching. It was while teaching in Decorah, Iowa, that she met her first husband, Byron Torvik.

They were married in Decorah on Sept. 24, 1949. The couple had two children and were later divorced. In 1956, Pat returned to teaching in Harmony before moving to Austin in 1958 and took a teaching job in Lansing.

On June 1, 1958, Pat married Lester Hahn in Preston. She continued her teaching career in the Austin Public School system, teaching at Webster, Sumner, Lincoln and Neveln schools. She retired in 1988 after 30 years with Austin Public Schools. Her husband Lester passed away in March 1991. A fan of ‘big band’ music, especially Guy Lombardo, Pat enjoyed gardening and collecting dolls, miniatures and books. She was a member of the Red Oak Grove Circle and enjoyed the Strawberry Festival. Pat will be greatly missed by her family and friends.

She was preceded in death by her parents Ivan and Ruth Thompson and her husband, Lester Hahn.

Pat’s family will greet friends from 4 to 7 p.m. today at Worlein Funeral Home in Austin with a memorial prayer service beginning at 6:30 p.m. The Rev. Lindsay Stolen of Red Oak Grove Lutheran Church will officiate. Interment will be in Crown Hill Cemetery in Preston at a later date. Pat loved the color red. Please wear red to honor her at her service. Memorials can be directed to Red Oak Grove Lutheran Church. Services were prearranged and performed by Worlein Funeral Home of Austin. Condolences may be expressed to the family online at www.worlein.com.