Funeral services for Perk Bergstrom of Albert Lea will be at 11 a.m. Monday at First Lutheran Church in Albert Lea. The Rev. John Holt will officiate. Interment will be in Alden Cemetery. Friends may visit with family one hour before services at the church. Bonnerup Funeral Service is assisting the family. 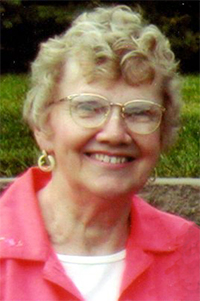 She was born March 3, 1931, on a farm near Alden, the daughter of Christopher and Agnes (Andersen) Jorgensen.

Perky grew up on a farm outside of Alden and the family moved to Albert Lea when she was a sophomore.

She graduated from Albert Lea High School with the class of 1949.

Perky was married to Jim Bergstrom April 2, 1950. To this union two sons were born, David and Dennis. They later divorced in 1979.

They had lived in San Diego for four years while Jim was in the service. They returned to Albert Lea and Perky had worked as a secretary at Wilson & Co. and Queen Stoves. She later was a receptionist at the YMCA for 10 years, and after retirement helped with visitations at Bonnerup Funeral Service.

She was a member of First Lutheran Church where she had served as a Sunday school teacher for many years and was also one of the founding members of the Mission Circle.

Perky enjoyed being active in community events, including the Cancer Bike-A-Thon, well into her 60s. She loved spending time with her family, playing cards — especially bridge and 500 — reading, walking and dancing.

She was an awesome mom and grandma, always positive and encouraging, supporting her family in everything they did.

She will be lovingly missed by her two sons, David Bergstrom and wife, Trish, of Fargo, N.D., and Dennis Bergstrom and his wife, Laurie, of Albert Lea; grandchildren Matt Bergstrom of Plymouth, Kaylee Bergstrom of Maple Grove, Kaci Bergstrom of Missoula, Mont., and Emily and her husband, Trevor Schuster, of Lakeville; sister-in-law, Grace Jorgensen, of North Carolina; and many nieces and nephews.

Perky was preceded in death by her parents Christopher and Agnes Jorgensen; her brother, Evald Jorgensen; and sisters Alvina Smith, Pearl Garvin and Ardis Peterson.

Perky had a genuine care and concern for others and touched the lives of so many people in a positive way. She will be greatly missed.

The family deeply appreciates the exceptional care that Perky received from all of the staff at Good Samaritan Society of Albert Lea these past few years.