Poppe defeats Schminke in 27B 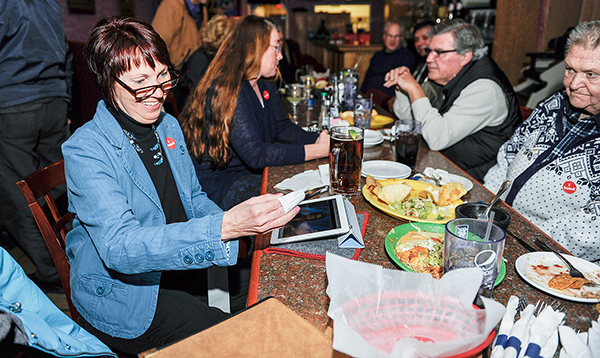 District 27B will remain in the blue as State Rep. Jeanne Poppe, DFL-Austin, retained her seat Tuesday night after she defeated Republican challenger Dennis Schminke.

Poppe captured 6,498 votes to Schminke’s 5,501 in what turned out to be her toughest challenge in years.

“I’m happy to be re-elected, and glad that everything went in my favor,” Poppe said.

Poppe acknowledged a “strong opponent who did the work” in Schminke, who said he was disappointed not only in losing but in the voter turnout for the state representative race.

“If there’s a disappointment for me, it’s that I still think the thing is at least theoretically winnable at least on turnout,” he said.

Though he didn’t rule out another run for the seat in 2016 — Schminke said it was too soon to decide on future campaigns — he was glad the state House of Representatives will likely go under Republican majority next session.

“That’s always been one of our two goals from Day 1,” he said.

Poppe said the next legislative session may be more disruptive than usual as both parties will have to find common ground on a variety of issues, including a solution to Minnesota’s massive transportation woes. Legislators on both sides of the aisle have signaled their intent to address the state’s failing roads and bridges, as well as congestion issues in the metro area.

“It remains an issue that is critical for all of us,” Poppe said.

She believes the legislature will be a “divided government, but hopefully … not a deadlocked government.”

“I’m just hopeful we can find some common ground,” she said. “It’s critical for us. We need to be able to find the common ground so we can move forward.”