Jessica Ann Root of Albert Lea and Antoine Karl Joseph Allemeersch of Brussels, Belgium, were married at 4:30 p.m. May 29, 2014, at Nuestra Senora del Carmen Catholic Church in Playa Del Carmen, Mexico. The wedding reception was at a beach club following the service. 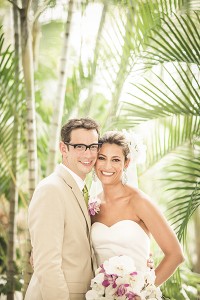 The bride is the daughter of Alan and Griselda Root, the sister of Erica Vanthavong and sister-in-law of Sy Vanthavong, all residents of Albert Lea.

The groom is the son of Daniel Allemeersch and Martine Petit and the brother of Aurelie and Caroline Allemeersch of Brussels, Belgium.

The bride grew up in Albert Lea, attending Albert Lea High School while her father, Alan Root, served as principal. The bride graduated from the University of Minnesota, Twin Cities, and later studied business at Durham University in England where she met the groom.

The groom grew up in Brussels and later studied civil engineering and business at the Université Catholique de Louvain in Belgium.

The bride and groom currently live in London and often travel back to Minnesota to visit family and friends. The couple plan to take their honeymoon next spring on a backpacking trip through Japan.