So what happens during the breaks? 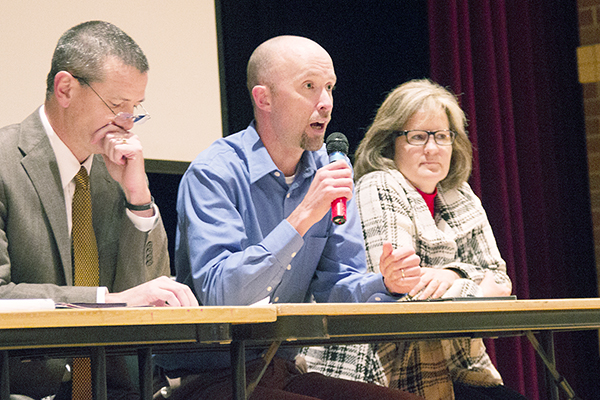 Jeshua Erickson speaks to the audience while answering a question during the third public forum on the calendar on Thursday evening. – Hannah Dillon/Albert Lea Tribune

Just because there will be breaks during the school year doesn’t mean the students won’t be in school, according to the superintendent of Albert Lea Area Schools.

There will be activities even for the students who don’t need remedial learning, he said.

The third public forum on the proposed calendar concluded Thursday night with Albert Lea school board chairwoman Linda Laurie saying the board would vote on the calendar’s approval Nov. 17.

If the vote indeed happens on that date, the proposed calendar would be sent to the Minnesota Department of Education for approval so the district could receive a waiver to start before Labor Day.

The forum included presentations by Albert Lea Superintendent Mike Funk, statements from several teachers in support of the calendar and questions submitted by the audience.

At least 50 people were at the forum, along with several administrators and teachers, who sat in the audience.

On Friday, district resident Tom Jones said he was disappointed that none of the three forums offered an open-microphone format.

“Parents didn’t really get a fair chance to open up their thoughts,” he said.

Many parents have asked in previous meetings and forums what the district plans to do for enrichment and remediation programs during the two-week breaks in October and March.

Funk aired a number of these programs during his presentation at the forum. 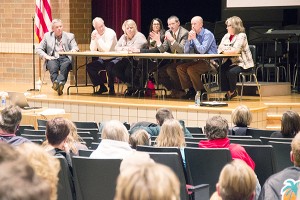 For enrichment, Funk said a program called an I-term course would take place from 9 a.m. to noon Oct. 5 through 16. Students would earn a quarter credit.

Transportation would be family provided and cost to the student would be nothing. The district also wouldn’t have to pay anything due to funding from compensatory revenue.

Some of the courses that could be taught during I-term include astronomy, advanced chemistry, political campaigning and contemporary novels.

The district could also offer an ACT prep course from 9 a.m. to noon Oct. 3 through 17. Transportation would be family provided and the cost for students would vary.

Funk said that college visits could be scheduled during these breaks to reduce the amount of days missed from school.

There is a possibility for intervention programs as well. High school intervention would take place from 9 a.m. to noon Oct. 3 through 17. Transportation would be provided for ninth-graders.

In this intervention, students who are in danger of failing learn study skills and finish work. The cost to students is nothing and the financial impact on the district is nothing due to compensatory revenue.

Credit recovery would take place 9 a.m. to noon Oct. 3 through 17 and students could make up credits from previous semesters or years. Parents would provide transportation, the cost to students is nothing and the funding source is from the Area Learning Center.

Kindergarten-through-eighth-grade targeted services could be from 8 a.m. to noon, with lunch provided until 12:30 p.m. Oct. 3 through 17. Transportation is district-provided and ALC-funded and breakfast and lunch are provided for free. There would be no cost to the student.

Extended school year special education for kindergarten through eighth grade would take place Oct. 3 through 17 with varying hours. Breakfast and lunch is provided for free, and there would be no cost to the student.

With many of the programs covered by the ALC or compensatory revenue, one of Funk’s final slides listed the operational costs of the district under the proposed calendar.

Funk said there would be about a $6,000 to $8,000 increase in utilities due to air conditioning in August and allocated $10,000 to unforeseen costs. However, he noted that the district plants on saving about $20,000 on substitute teachers.

One question from an audience member during the forum asked what compensatory revenue is and where it comes from.

According to the Minnesota Department of Education website, compensatory revenue is “used to meet the educational needs of pupils who enroll under-prepared to learn and whose progress toward meeting state and local content or performance standards is below the level that is appropriate for learners of their age.”

In his presentation, Funk focused on a theme that Minnesotans are “slaves to time.”

Funk also highlighted that he’s heard a lot of talk about “those” kids — referring to at risk or low-income students — during the past three forums.

Funk stressed that Albert Lea Area Schools is looking to increase proficiency and growth for all Albert Lea students, not just the gifted and talented or the at risk students.

From 2008 to 2012, Freeborn County’s percentage of people in poverty was 11.8 percent, according to the U.S. Census Bureau. The state’s percentage was 11.2 percent. The national average was 14.9 percent.

Funk also brought up the low graduation rate, which is one of the reasons the board proposed the calendar.

Read about what some teachers had to say at the forum and how the board reacted to community questions in the Monday issue of the Tribune.