Funeral services for Susan Eileen Troutner will be at 10:30 a.m. Wednesday at United Methodist Church in Albert Lea. The Rev. Joyce Shaman will officiate. Visitation will be from 4 to 7 p.m. today at the Bonnerup Funeral chapel in Albert Lea and again one hour prior to the service at the church. Interment will take place at 3 p.m. in Cedar Hill Cemetery in Elysian. 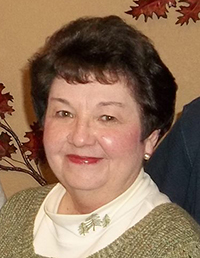 Susan passed away at St. Marys Hospital in Rochester Sunday, Nov. 23, 2014, from a brief battle with cancer. She was 66.

Susan was born April 10, 1948, to Ronald and Roberta “Bobby” (Zellmer-Short) Taylor in Mankato. She attended and graduated from Waterville-Elysian High School in 1966.  She went on to attend Mankato State University where she studied for two years in the secretarial program.

Susan was united in marriage to Sidney Troutner May 3, 1969, at Waterville Lakeside Methodist Church. The couple was blessed with two children.

Susan started her career at Waseca Memorial Hospital as a secretary receptionist. The family later moved to Albert Lea in the mid-1970s. She worked as a secretary for S.L. Johnson Insurance and had been working for Peterson Chiropractic as a secretary since 1994.

Susan was a member of Glenville United Methodist Church where she served on the membership and memorial fund committee, was a church historian and taught Sunday school for many years. Her favorite pastimes included talking on the phone with her friends, shopping dates with her sisters, caring for her cats, watching her daughter’s cheer team perform and enjoying a caffeine-free Coke. She liked to go shoe shopping, walking, time spent with her friends and she was a big supporter of the local humane society. She was a very caring, kind and outgoing person that always put others before herself. Most of all, she enjoyed the time spent with her family.

She is preceded in death by her parents; mother- and father-in-law Sidney (Josie) Troutner; and a sister in-law, Diane Kletschka.

Those left to cherish her memory include her husband of 45 years, Sidney, of Albert Lea; children Stacy Troutner of Lees Summit, Mo., and Beth Troutner, of St. Clair; siblings Gary (Linda) Taylor of Waseca, Patricia (Dean) Kriskovich of Avon, Ind., and Nancy (Bruce) Pittman of Waterville; sisters in-law Janet Blom, Darlene Bayer and Betty Jo Troutner; as well as many other loving nieces, nephews and other relatives.