Teachers speak up on school calendar 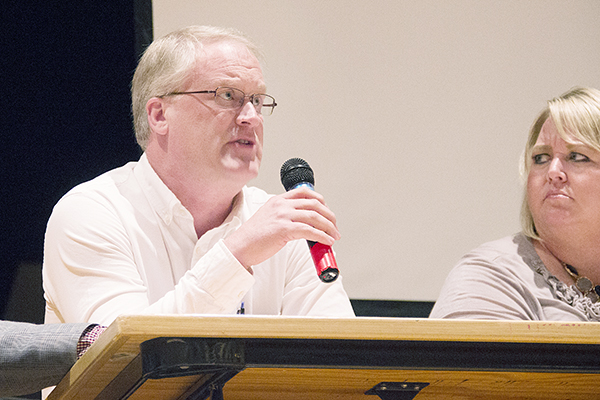 Editor’s note: This is the second in a two-part series on the third and final public forum on the proposed calendar.

Members of the community heard from the school board and teachers Thursday during the third public forum on the balanced calendar, and chairwoman Linda Laurie said the board will come to a vote on Nov. 17.

On Sunday, the Tribune wrote about Albert Lea Superintendent Mike Funk’s presentation and proposed enrichment and remediation programs for the two week breaks in October and March.

If the board votes on the proposed calendar Nov. 17, the calendar would then go to the Minnesota Department of Education for approval to get a waiver to start the 2015-16 academic year before Labor Day.

The forum also included statements from several teachers in support of the calendar and questions submitted by the audience.

At least 50 people were at the forum, along with several administrators and teachers, who sat in the audience.

Al Helgerson, Area Learning Center teacher and president of the Albert Lea Education Association, said he polled his staff and came up with a lot of questions for the school board in regard to the proposed calendar.

After meetings with the administration and executive board, Helgerson said the calendar looked like a good idea and put ALEA’s support behind it.

In response to teachers being “muzzled,” Dorman said she was “offended,” stating that she is an outspoken individual.

Stating that things have changed since she was in first grade in the 1960s, Dorman said the calendar should change along with businesses and the economy.

Dorman said there is irrefutable research that says summer reading loss occurs in students. She said a child in poverty loses three months of progress from where they were at at the end of the school year, while middle-income students lose about a month.

With the proposed calendar, summer would be reduced one to two weeks, depending on the number of snow makeup days.

Karen Zwolenski, principal of Hawthorne Elementary School, said the decision is not about the parents, it’s about the kids. She said that it’s not about adult schedules or parent convenience.

Zwolenski said she has seen the world from student eyes and said the proposed calendar would create balance throughout the entire year.

In August, Zwolenski said students are ready to go back to school while in May it is harder to keep students engaged.

Zwolenski said the balanced calendar is not a magic bullet but said it’s about what is best for the kids.

One audience member mentioned that they had spoken to some teachers who are opposed to the calendar but are too afraid to speak up, fearing it would result in losing their jobs.

Funk rebuked that statement, saying that in the five years he’s been at Albert Lea Area Schools only one teacher has been terminated. He said he’s tired of the issue being shifted from the discussion of students to fear and mistrust.

Funk and the board said if any teachers against the calendar wanted to speak, they were welcome to.

No teachers opposed or undecided on the proposed calendar spoke at the forum or have come forward to state their opinion.

Questions from the audience

For about half of the public forum, audience members submitted questions that were read to the board and Funk by Bruce Miles of St. Cloud-based Big River Group.

One audience member asked if targeted services can be required or tied to passing a student to the next grade.

Laurie said the district can’t require students to go to targeted services, but instead stressed that strengthening relationships between students and teachers could urge students to attend remediation.

Leland said what people do with where their students go to school is their own choice.

An audience member asked about the gifted and talented program having no one running it this year.

When asked if the district could go back to the agrarian calendar if the proposed calendar doesn’t work, Ciota said that would be possible.

Another audience member asked why the district doesn’t try out a proposed calendar in just one school as a pilot school.

Leland said this would be like trying to redraw the district boundaries, and said some angst would come from parents who are wondering why the district picked their school over another school.

He said the board is trying to affect all kids in the district and changing one school wouldn’t give a true picture of the change.

Board member Julie Johnson agreed and said the board wants all students to be successful and being open to all things is important.

When asked about how family structure affects a student’s learning, board member Jeshua Erickson said he feels the breakdown of a family plays a significant role in education, noting that money can be one of the reasons a family breaks down.

Board member Jill Marin said adverse childhood experiences play in to school performance, and giving social support to the at risk students and their families is key.

Ciota said when he is making his decision, he won’t look at the Springsted Inc. survey data nor will he look at the online petition. What’s important to him, he said, is if a majority of the teachers favor the change.

She said it seems like there is a substantial trust issue in the district and she thinks it is important to reestablish that.

Ultimately, Marin said she looks forward to having more conversation as a board about the proposed calendar and what happened at the third forum.

Johnson is appreciative of all the people who have reached out and thinks it is great that the community is talking about important things and looking at ideas.

Leland said he guarantees this won’t be the last thing that is put in place or talked about as an opportunity and that he wants to challenge the school’s staff and administration to not be good, but great.

After the public forum, Heather Sadauskis, who is running for school board, posted on her Facebook page that she has changed her stance on the proposed calendar.

During the Wednesday night school board debate, Sadauskis said she was in support of a 45/15 calendar but not the proposed calendar by the school board. On Facebook, Sadauskis announced she now is in “full support” of the proposal.