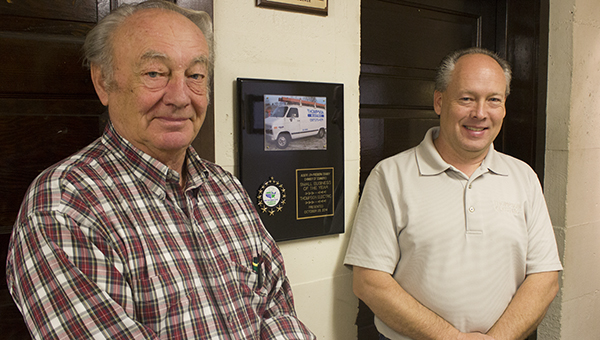 Thompson Electric of Albert Lea prides itself on customer service.

It’s not uncommon for the company to receive handwritten letters of thanks from customers for resolving an electrical problem or a new installation.

“We want to treat the customer as if we were the customers,” said, co-owner Michael Thompson.

For this and other reasons, Thompson Electric, 310 Second Ave., was named Small Business of the Year last month by the Albert Lea-Freeborn County Chamber of Commerce.

Chamber Executive Director Randy Kehr at that time said the company stands out for its customer service. The business provides electrical work for both commercial and residential buildings and has been in the community for several decades. It is owned by father and son Eugene and Michael Thompson.

“I was pretty shocked,” Michael said of finding out about the award. “I didn’t think we were at the caliber, that we met the criteria they were asking for.”

Both the father and son are graduates of Albert Lea High School — Eugene in 1961 and Michael in 1985 — along with Dunwoody Institute. Both also have their master’s licenses.

Michael starting working at the business in 1995 before becoming co-owner with his father nine years later.

The business presently has six employees.

Eugene is a part of the Cloverleaf Lions Club, which played a major role in the restoration of the Edgewater Cottage. Michael is on the chamber’s Green Committee, which promotes energy efficiency.

Over the next 10 years, Eugene said he will probably be working less, while Michael said he anticipates Thompson Electric will be expanding and reaching outside of Albert Lea and Freeborn County more than it does presently.

They said they are unsure at this point whether they may move to a new location. If they do, they will stay in Albert Lea.