Not only did Heintzman have more than twice as many assists as anyone in the Tribune’s seven-team coverage area, her total of 1,165 was the most in Iowa’s Class 2A. The only player in the state of Iowa with more assists than Heintzman was Samantha Bohnet of Council Bluffs Abraham Lincoln, a team in Class 5A, with 1,230. Heintzman was sixth in the area with 43 ace serves and was North Iowa All-Conference.

Janzig is the only member of this season’s All-Area First Team to make it back for the second consecutive year. She boosted her kill total from 285 last year to 310 this year, which was second in the area. Janzig was the only player in the area to post triple digit blocks with 110. She excelled at service line as well. Janzig posted the fifth-most ace serves in the area with 48. 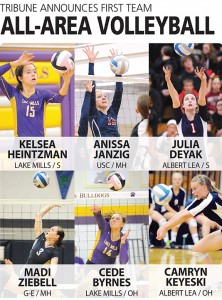 Byrnes had a well-rounded season as a hitter on the left side, and Lake Mills coach Jim Boehmer said she is one of the team’s most complete players. She led the area with 315 kills, was second with 387 digs and was tied with Heintzman for sixth in ace serves with 43. She was a First Team North Iowa All-Conference selection.

Despite switching positions from outside hitter to setter, Deyak led the Tigers as she posted the second-most assists in the area with 562, and the third-most ace serves with 54. She showed quickness and leadership and had 57 kills, 44 blocks and 131 digs. Her attack rate was 57 percent. Deyak filled the gap after the graduation of Bryn Woodside, a First Team All-Area selection last year.

Ziebell was fourth in the area with 351 digs and ninth with 187 kills, despite being on a team with a young roster that struggled to receive and pass. She was the Wolverines’ team MVP for the fourth straight season and was a Southeast All-Conference honorable mention selection. Ziebell showed patience, quickness and athleticism to moved up from her spot as a Second Team All-Area selection last season.

Although Keyeski played as a hitter on the left side, she led the area with 403 digs. That improved on her 378 digs as a libero last season, when she was a Second Team All-Area selection. Keyeski was 828 for 888 on receiving, and she had 132 kills and 28 ace serves.

Shifflett finished in the area’s top four in blocks, kills and ace serves. She was second in the area with 96 blocks, third with 286 kills and fourth with 50 ace serves. Lake Mills coach Jim Boehmer said Shifflett has the ability to dominate a match with her play at the net.

Haberman was a serving machine with 87 ace serves, which was 23 more than the second-best total by Lake Mills’ Jewell Gasteiger. Haberman added 65 blocks, which was sixth in the area, 101 digs and nine assists.

Although Bute was two years younger than the second-youngest player on Knights’ roster, she showed leadership and posted numbers in the area’s top 10 in two statistical categories. The second-year starter was third in the area with 548 assists and tied for eighth in ace serves with Lake Mills’ Emily Orban with 41.

Stork and teammate Ryann Hagen played exceptional at the net with 90 blocks each, which tied for third in the area. Stork added 116 kills, 23 assists and 22 digs.

Orban had Lake Mills’ second-most digs with 366, which was third in the area. She was also fifth on the team with 31 ace serves, which tied Alden-Conger’s Erika Bute for eighth-most in the area.