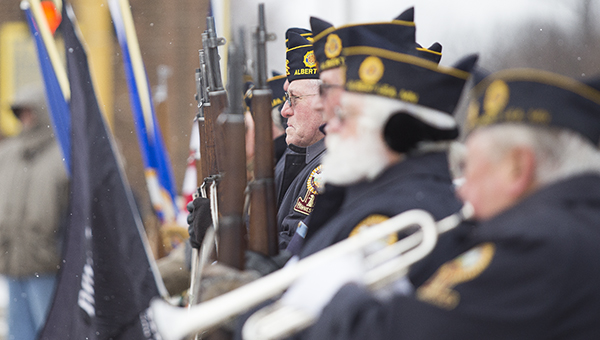 ‘We are all Brothers and sisters’ 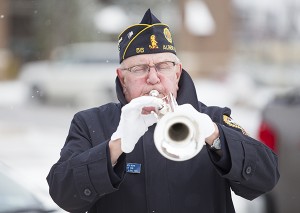 That’s also how he began his story during the annual Veterans Day program at the Freeborn County Courthouse.

The morning Veterans Day program began at 7:45 a.m. at Southwest Middle School and moved to the courthouse at 10:50 a.m. for a ceremony at the Freeborn County Veterans Memorial. The colors were raised, guns were fired and “Taps” was played.

After, the crowd moved into the room in which the Freeborn County Board of Commissioners meet. After a welcome by VFW Commander Jim Hockenson, a prayer by VFW Chaplain Larry Weigel and the pledge of allegiance, Barron took the podium to talk about Veterans Day and his experiences.

During a campaign in 1971 to cut off the Ho Chi Minh Trail, Barron was assigned to rescue two pilots that had been shot down. The pilots were contacted through survival radio, and the survival radio requires the user to have the microphone very close to their mouth to pick up the sound. 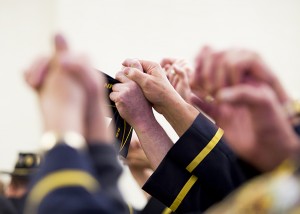 The pilots shouted into the microphone that they were being chased by tanks, and Barron said he could hear the tank treads in the background, meaning the tanks had to be immediately close.

After taking out two of the tanks, one of Barron’s fellow soldiers told him to look up, and he noticed that large rounds were passing right by him, but not hitting him.

Barron took out that gun, which he thinks is the weapon that shot him out of the sky a few days prior, saying he got his revenge.

What he stressed with this story is that soldiers try to keep each other safe.

Barron said stories like this will fade away if they aren’t talked about.

He told a story about how he was talking to someone whose uncle had received a Medal of Honor, the highest honor a U.S. service member can achieve, but didn’t know what had happened as their uncle didn’t talk about it.

Barron had a book outlining all of the recipients of the Medal of Honor and found out that the person’s uncle had been injured and was being treated, but after learning that his platoon was under attack he unplugged himself and went to the front lines.

This man was third in command and he discovered that the two higher-ranking officers above him had been killed. He managed to save the platoon but ended up getting shot non-fatally in the eye. 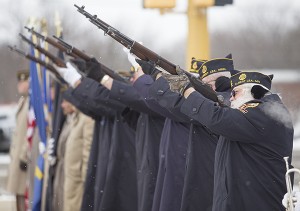 During his speech, Barron said all veterans have a bond, no matter the branch they served in.

He said things like a first haircut, sea rations and Meals Ready to Eat are special memories that all veterans share and can bond over.

But Veterans Day didn’t start out honoring all veterans, just those from World War I.

In his speech, Barron explained the history of Veterans Day.

Veterans Day began as Armistice Day after the signing of the document that ended World War I. The armistice was signed on the 11th hour of the 11th day of the 11th month, and President Woodrow Wilson proclaimed Armistice Day on Nov. 11, 1919.

Armistice Day wasn’t an official holiday until 1938, and in 1954, after World War II and the Korean War, the holiday was amended to Veterans Day, honoring all military veterans of all eras.

The program ended with the Careyaires singing “America the Beautiful” and a medley of military themes from the Navy, Army, Marines, Air Force and Coast Guard.

The last song sung was “God Bless America,” with members of the audience holding hands in solidarity in honor of veterans.