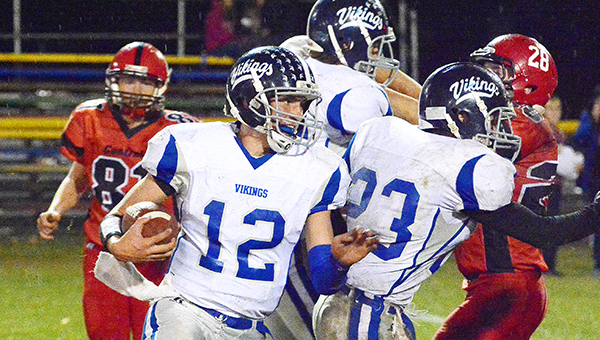 Josh Einertson of Northwood-Kensett carries the ball Monday in the second round of the 8-Man state playoffs. Einertson rushed for 177 yards and two touchdowns. He also completed 8-of-21 passes for 79 yards and a touchdown. — Mike Simmons/Northwood Anchor

Despite holding an offensive juggernaut to its lowest scoring output of the season, the Northwood-Kensett football team’s postseason run ended.

The Vikings lost 44-20 Monday at Central Elkader in the second round of the 8-Man state playoffs.

“I was happy with the defensive effort,” said Northwood-Kensett coach Dave Capitani. “They had the leading rusher in the state (8-Man), and we did a good job on him.”

Capitani referred to Nathan Fitzgerald, who carried the ball 194 times this season for 2,267 yards and is one of four players in the state of Iowa to break the 2,000-yard rushing barrier.

Fitzgerald’s season average is 11.7 yards per carry, and he’s rushed for three-or-more touchdowns in eight of 11 games. Against Springville, he went off for nine rushing touchdowns, and he carried the ball for 357 yards and six touchdowns against Turkey Valley — a team that advanced to the second round of the state playoffs.

However, Northwood-Kensett’s defense held Fitzgerald to less than half of his average, 5.7 yards per carry, and two touchdowns.

Coleby Bratrud, who fought through an ankle injury, led the Vikings with 15 tackles. Tom Yezek added nine and Dawson Van Ryswyk had eight.

Northwood-Kensett’s defense played better than the final score suggested because of a pick six thrown by the Vikings and a fumble return for a touchdown.

Central Elkader led 26-0 at halftime, but the Vikings outscored the Warriors 20-18 in the second half.

“In 8-Man, 26 points isn’t an insurmountable lead,” Capitani said. “We struggled offensively in the first half, but we changed it up in the second and had some success moving the ball.”

Quarterback Josh Einertson led the Vikings through the air and on the ground. He completed 8-of-21 passes for 79 yards with touchdown and an interception. He also out-rushed Fitzgerald for a game-high 177 yards and two touchdowns on 28 carries. Keano Batton added eight carries for 24 yards.

However, the defensive numbers were more comparable. Northwood-Kensett gave up an average of 20.7 points per game, while Central Elkader gave up 17.8.

The Vikings finished the season 7-4 overall. After starting 0-2, Northwood-Kensett won seven of its next eight games before Central Elkader, including a 50-32 home win over West Central on Wednesday in the first round of the state playoffs.

Aside from Central Elkader, the losses were against Graettinger-Terril/Ruthven-Ayrshire, West Bend and Janesville.

Each of those teams qualified for the state playoffs.

Graettinger-Terril/Ruthven-Ayrshire lost 14-8 against Marcus-Meriden-Cleghorn in the first round. West Bend advanced to the state quarterfinals on Monday with a 45-6 win over Harris-Lake Park. Janesville played on Monday as well but lost 52-51 against Hartwick-Ladora-Victor.

“It was a good year,” Capitani said. “Our four losses were against very good football teams.”