Everybody has cockamamie theories about the weather.

Ken Nelson, the local man who in the 1970s invented a machine to make pillow-shaped ice cubes for restaurants and bars, feels radio waves, cellphone relays and other kinds of electromagnetic radiation affect the paths of storm systems, and he isn’t shy about sharing his view. 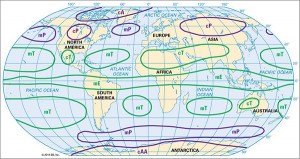 This Encyclopedia Britannica map shows the dominant air masses on the planet. Notice how the continental polar air mass in North America is much small than the one over Europe and Asia.

Well, I’ve got my crazy weather thoughts, too.

You know how our weather in Minnesota always comes to us from other places? Alberta Clippers in the winter. Summer dry heat from the American Southwest. Humidity surging up from the Gulf of Mexico. Gentle eastern breezes from the Great Lakes. All this begs the question: Where the heck does all the weather generate?

It’s a proven fact — meteorologists and climatologists learn this in college — that the globe has places where air masses tend to generate. It’s simple really. Air over a big land mass with widespread and similar features, like a desert, an ocean or the coniferous forests of the north, will be greatly influenced by that land feature, like how the sun can heat the desert sand or the ocean can absorb and moderate warmth.

But a land mass like the British Isles, well, they are not really all that large in comparison to, say, the Sahara Desert or the Amazon Rainforest, so the islands wouldn’t have much of an effect on an air mass.

Yes, there are many, many other factors that influence the weather, from the coriolis effect to how the tropics are closer to the sun to dominant ocean currents and to how cold fronts slamming into warm fronts form tornadoes in the American Midwest, but in general there are places where the air heats or cools, resulting in movement of air masses.

Weather people even have abbreviations for these air masses. Here they are: 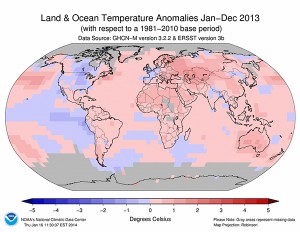 And check out the Encyclopedia Britannica map I supplied with this column to get an idea of where the air masses form. A big air mass over central Canada will form different characteristics than an air mass over the Pacific Ocean, even if they are at the same latitudes.

OK, that’s the not the cockamanie part. This is.

Why is it that North America the past two years has had two really bitter-cold winters but two years ago we had a mild winter?

In each of the past three years, I’ve paid attention to the weather on the other side of the Arctic Ocean. Russia and Europe have experienced mild winters while North America has harsh winters the past two years. Three years ago, we had a mild winter and Europe had record snowfall.

And this year — the fourth year — we have early cold weather. What gives?

If we toss out all the stupid politics and accept that scientists are right about global warming, which I do, we know that the world has experienced warmer and warmer temperatures, even if we don’t necessarily experience it here in Minnesota. In fact, temperature maps of the globe show Russia experiencing some of the most warmth on the planet when compared to the historical record. The map of 2013 temperature anomalies, when in color, shows red over Russia and blue over Canada and central United States. The red indicates higher than normal temperatures and blue is lower than normal temperatures.

That’s not always the case for the entire year, but if you look at the same maps for winter months of recent years, it seems to be the pattern — Russia is red. Canada and central U.S. is blue.

I believe that the continental air masses around the polar regions play a big tug of war — but with push instead of pull — with the Arctic cold air and have the ability to bump that air mass down the Canada-Alaska side or the Europe-Russia side. After all, these are the air masses that create the circumpolar jet stream. The fact that the Europe-Russia side has a bigger air mass means it has more push.

They are like two bulls. Sometimes the little bull wins, but usually the big ones does, pushing that cold to our side of the planet.

And in the summer, it seems like the maritime air masses have more control over the weather. Last summer was the warmest on record for the North Pacific.

So is it nice in Moscow right now? They just had a big November snowfall. The forecast calls for highs around 28 and partly sunny skies. What it means is, for my theory to work, I have to watch the entirety of the winter. Besides, the jet stream flops around like a wave, and there are times when it’s best to watch places like Mongolia, Siberia and Korea because, like this time, Europe seems to get the stuff the United States had a week before.

Eventually, you notice a lot of times when one side is unseasonably cold and the other side unseasonably warm, hitting record temperatures.

I’m no expert, but I did read an article on global warming in the Washington Post last January during the famed polar vortex cold snap. It said climate experts predict that the United States could face record cold snaps in the winter as the planet heats up. We also are expected to face record highs in the warm months, too.

That same article brought up some of my cockamanie points (maybe I am right?), but it was more about how the air masses will impact the jet stream. It said the jet stream could weaken and meander all over the place, causing these cold snaps. Apparently, the theory is heavily debated.

Hey, we all should have crazy theories about the crazy weather. I’d say people are crazy if they haven’t made up a crazy theory.