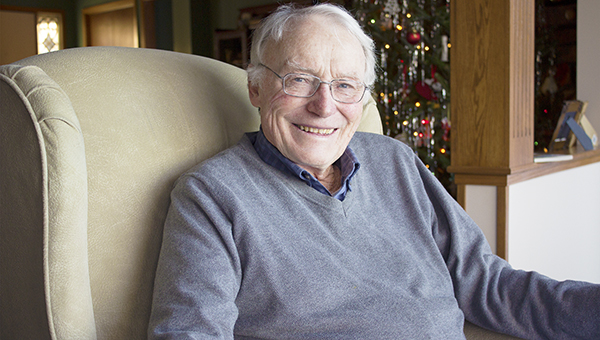 Michael Cotter got his start storytelling at a workshop in St. Paul and he has been hooked ever since. Through his storytelling, he has had many opportunities such as going to the Smithsonian. – Hannah Dillon/Albert Lea Tribune

The value of a word

When he was 50, Michael Cotter made a decision that changed his life.

Cotter, who worked as a farmer in the Austin area, was the youngest of eight children. He said he always liked to talk and tell stories, despite not being very dramatic.

“They kept telling me to shut up, kind of, because I liked to talk,” Cotter said. 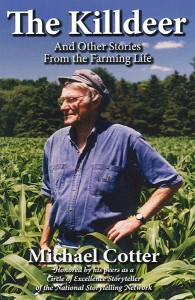 At 50, Cotter went to a storytelling workshop in St. Paul. He almost didn’t go, and when he decided to go, he almost left before attending a class on personal stories. Cotter said most of the storytellers at the workshop were very dramatic, but he was more interested in telling stories from his life.

Ever since that workshop, Cotter said he’s been hooked on storytelling. And through his storytelling, he’s had many experiences and breaks that he said he wouldn’t have had without it.

Cotter has been to the Smithsonian and the National Storytelling Festival in Tennessee due to his stories. He also had a radio show in Des Moines and works with Young Authors, Young Artists to talk to kids about storytelling.

He had the opportunity, as well, to go to New Jersey and meet people dying of cancer and AIDS, and Cotter said he ultimately got to help them tell their own stories while they were the most vulnerable.

One cancer patient he remembers from that trip was an 11- or 12-year-old boy with terminal cancer who said he just wanted to be treated like a kid. Cotter said that trip gave him new perspective and it was hard to return to life on the farm after that.

Cotter’s family farm is a third generation farm, and it’s the center point of his storytelling as he’s worked on the farm since he was a child and his stories are from his personal experiences. Cotter said stories keep happening and he looks for them, kind of like hunting.

One of the most difficult things for Cotter as he progressed in his storytelling was getting on stage. He’d never been on a stage before, as in school he always had to go home right after classes ended to help on the farm.

He said getting on stage was scary, but telling his own stories made it easier. Cotter said he didn’t have to remember anything he made up, he just needed to relive the stories that he’d already experienced. And despite his limited stage experience, Cotter said other storytellers he met were always encouraging him.

Cotter’s fourth book, “The Killdeer,” was published in the beginning of October. He has two other books; the first two were self-published and the third was a book on 1930s to 1970s farming seasons, published by Arcadia Publishing. 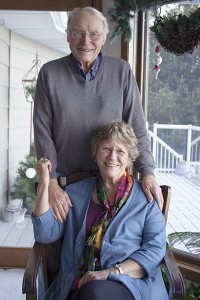 While Michael is the storyteller, his wife, Bev, is the one who writes it down. – Hannah Dillon/Albert Lea Tribune

“The Killdeer” is available at Book World, the Albert Lea Art Center and from Michael and his wife, Bev, themselves.

The fourth book was published by Parkhurst Brothers Publishing; this publisher specializes in storytellers books and contacted Cotter to see if he was interested in writing another book.

While Cotter tells the stories that are in his books, he doesn’t write them down. He said he’s not much of a writer, so his wife, Bev Jackson Cotter, does the writing for him. Michael Cotter said it took him a while to find the right writer for his stories, as other writers he hired would put his words in their own voice.

“One word can make a difference,” Bev Jackson Cotter said. She said they spend a lot of time making sure they’re both happy with the words on the page.

Michael and Bev were married nine years ago, but have been working together for much longer than that. They have a storytelling group in Austin and also used to host a storytelling festival in Austin for 22 years.

As for now, Michael Cotter said he isn’t sure about another book, but didn’t swear it off completely. He is working on a CD set with his niece who is a singer/songwriter and wants to put Cotter’s stories to music.

Bev Jackson Cotter said she doesn’t know many other people her husband’s age who just released a book, is working on a CD set and has had so many different opportunities in his life.

Michael Cotter, however, is humble.

“Life is a learning experience,” he said. “Stories are always happening in our lives.”

Interesting fact: The first storytellers he met were homeless men who worked on the family farm.