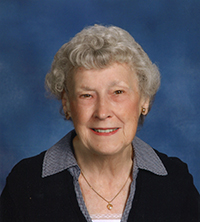 On Oct. 9, 1945, she was united in marriage to Marion “Sparky” Jergenson in Wells. The couple purchased the family farm in Bricelyn following World War II. Alice lived on the farm in Seely Township for over 69 years. Alice was a homemaker as well as being employed by Bricelyn Canning Factory and Telex Corporation in Blue Earth.

She was a very active member of Bricelyn Lutheran Church, including WELCA and Esther Circle. She volunteered for Meals on Wheels for a number of years. Alice enjoyed playing cards, her very large vegetable and flower gardens, family “garden parties,” making apple pies from the apple trees, bird watching, her pets and all of God’s creatures, but she especially enjoyed cooking for her family at family gatherings.