Funeral services for Ardis “Ardy” H. Angell of Albert Lea will be at 11 a.m. Monday at Red Oak Grove Lutheran Church in rural Austin. The Rev. Lindsay Stolen will officiate.   Visitation will be from 3 to 6 p.m. Sunday at Bonnerup Funeral Service in Albert Lea.  There will be no reviewal at the church. Interment will be in Red Oak Grove Lutheran Cemetery at 9:45 a.m. Monday. 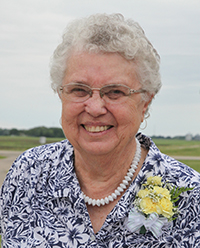 She was united in marriage to William F. Angell Dec. 14, 1949, at Trinity Lutheran Church in Albert Lea. Following their marriage they lived and farmed in the Blooming Prairie area. They later retired and moved to Albert Lea.

In her early years Ardis had been very active in PTA, the Extension Club and as a 4-H leader. She was an active member of Red Oak Grove Lutheran Church where she taught vacation Bible school and was active in WELCA and Mission Circle. Ardis enjoyed doing handiwork — especially hardanger and crocheting — and had a great interest in genealogy. In later years she took up golf and enjoyed 28 years of wintering in Mesa, Ariz. Bill and Ardis also enjoyed traveling, visiting England, Alaska and Hawaii.

She was preceded in death by her parents Arnold and Nomie Jensen; stepmother, Alvina Jensen; brother, Carroll Jensen; and sister-in-law and brothers-in-law Betty and Lloyd Ellingson and and Ralph Angell.

The family wishes to express their appreciation for the tender loving care Ardis received from Thorne Crest Retirement Community and the staff at St. Marys Hospital.

Ardis was a much beloved wife, mother, grandmother, neighbor and friend. She will be greatly missed.