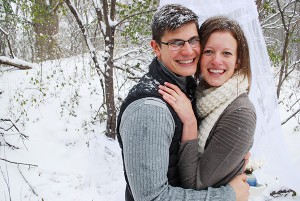 Kate is the daughter of Rick and Perian Buringa of Albert Lea and is the granddaughter of Phyllis Conrad of Amboy.

Christopher is the son of Robert and Daniela Weniger of Kuala Lumpur, Malaysia, formerly of Albert Lea, and is the grandson of Helen Weniger of Sioux Falls, S.D.

The bride is a 2010 graduate of Albert Lea High School and a 2013 graduate of University of Minnesota, Morris. She’s currently attending Midwestern University, Chicago College of Osteopathic Medicine in Downers Grove, Ill.

The groom is a 2012 graduate of Albert Lea High School and will graduate in January from Augustana College in Sioux Falls. He will attend Trinity Evangelical Divinity School in Deerfield, Ill., starting in the fall of 2015.

A wedding is planned for the summer of 2016.