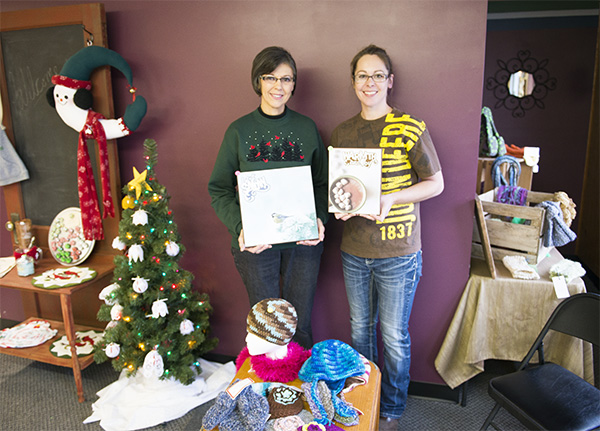 Dawn Loverink, right, owns Depot Salon in Clarks Grove and recently opened up a craft corner in the business in September. Her mother, Barb Dobberstein, left, helps her with the business. – Colleen Harrison/Albert Lea Tribune

CLARKS GROVE — What started out as a possible way to fill time quickly became part of her business for Dawn Loverink.

Loverink, 34, owner of Depot Salon in Clarks Grove, opened a craft corner in the business in September. The salon, at 201 W. Main St., has been open for nine years. She said that a somewhat slow winter at the salon last year prompted her to look for something to fill that downtime. 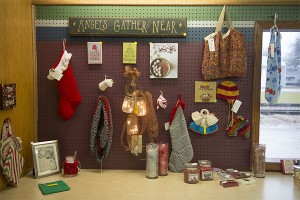 Loverink said she has nine other vendors selling items such as crocheted or knit garments, honey and painted signs in the shop. – Colleen Harrison/Albert Lea Tribune

Loverink, an Ellendale native, now lives in Hollandale with her husband, Lance, and children Lynsey, 4, and Easton, 2. She got her certification in cosmetology from Riverland Community College in Austin and offers haircuts, styling, coloring and perms, to name a few, at the salon.

She and her mother, Barb Dobberstein, who helps out at the business, came up with different crafts they could make using a Cricut cutting machine. The machine has different cartridges that get inserted to make numbers and letters. They make canvas art pieces that can be personalized as signs or can have different pictures and sayings on them.

Loverink said that she hosts nine other vendors in the shop, all of which are local.  Some of the items for sale are local honey, knit and crocheted garments, Minnesoyta Nice soy products and canvas art pieces, among others. Everything that is sold as part of the craft corner is homemade, handmade, up-cycled or repurposed by the vendors and artists themselves. Anyone interested in becoming a vendor can talk to Loverink at the salon or can call her at 507-256-4249.

Loverink said she enjoys having the craft corner in the salon because she’s gotten to meet a whole new group of people through bringing in vendors, and has new customers for both her salon and the craft corner businesses crossing over. Her goal for the future? “To keep everything going,” she said.