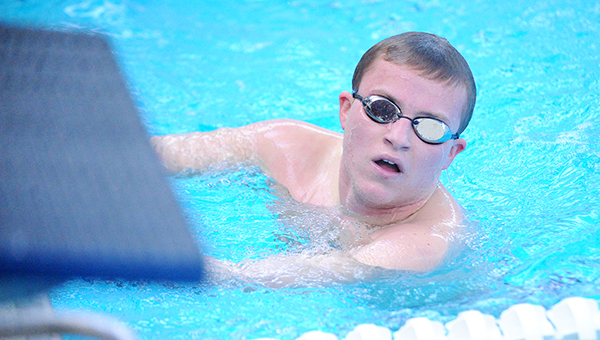 Luke Sundblad of Albert Lea looks up at the scoreboard after swimming the final leg of the 400-yard relay Thursday against Faribault at Albert Lea. — Micah Bader/Albert Lea Tribune

In their second meet of the season, the Albert Lea boys’ swimming team fell 88-75 Thursday against Faribault.

Carter Simon won the 100-yard breaststroke with a time of 1:15.7, and Kendrick Fjeldberg, Andrew Field, Aaron Zogg and Luke Sundblad won the 400 freestyle relay in 4:18.66. 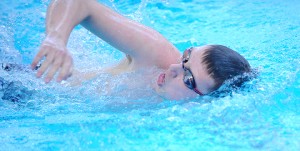 “If we keep going at this pace, we’re going to do very well at the end of the year as far as time drops go,” he said.

Esteban Johnson was chosen by Albert Lea’s coaching staff as the Swimmer of the Meet.

In practice, Clapp said the Tigers were busy with team-building activities.

“The chemistry is getting better each day,” he said. “We’re trying to keep everything fun and be competitors at the same time.”

Next, the Tigers will host their only invitational of the season with 12 teams on Saturday. Diving will start at 10 a.m., and swimming will start at 1 p.m. The final two home meets will be on Jan. 15 and Feb. 3.