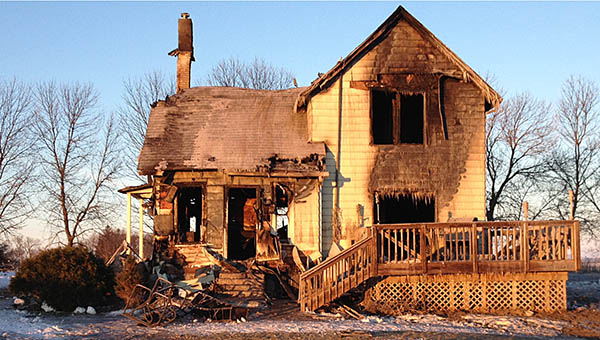 The sun shines on a burned-out house this morning north of Bricelyn. The place, which burned Monday night, was the home to Doug Pike and his dogs. – Michele Beyer/Albert Lea Tribune

BRICELYN — A man and his dogs are without a home today after his rural home burned Monday night.

The air temperature at that time, according to the National Weather Service, was 1 degree above zero. Firefighters didn’t clear the scene until 5 a.m., Stallkamp said.

The weather service indicates the mercury rose to 3 degrees by that time.

With water dousing the flames all night, the place was a total loss.

“Everything was frozen solid,” he said. “There is just a shell standing.”

The Bricelyn firefighters received assistance from Wells, Walters and Frost, he said.

The chief said Pike was the sole resident and said he made it out safely with three dogs. He said he was staying with friends. The American Red Cross assisted him, too, he said.

The firefighters were able to keep warm because they kept moving, Stallkamp said. He said South Central Rehab had a trailer available for warming up.

The cause of the fire remains under investigation. Stallkamp said the State Fire Marshal’s Office has visited the acreage.