Funeral services for George H. Morley of Albert Lea will be at 10:30 a.m. Wednesday at Christ Episcopal Church in Albert Lea. The Revs. Henry Doyle and George Marin will officiate. Visitation will be from 4 to 6 p.m. Tuesday at Bonnerup Funeral Service in Albert Lea and one hour prior to the service at the church. Interment will be in Graceland Cemetery. 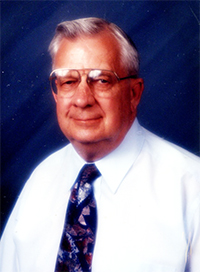 George was born Dec. 4, 1925, in Hayward, the son of Harry and Estella (Olson) Morley. He was a graduate of Albert Lea High School and served in the U.S. Navy.

George was married to his first wife, Lorraine, for over 40 years. After her passing he was united in marriage to Carmen Orta June 7, 1997.

He had been employed as a bricklayer for many years before becoming an agent for Prudential Life Insurance Co. He also worked for Senior Resources of Freeborn County and Curt’s Pharmacy. George had been a member of Grace Christian Church and most recently Christ Episcopal Church in Albert Lea. In his free time he enjoyed playing golf, bowling, coaching hockey and all sports with his grandkids.

He was preceded in death by his parents; wife, Lorraine; son, John Morley; brothers Robert and Harry; and sister, Dorothy Tveit.