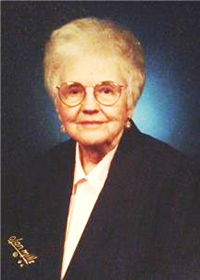 Gladys Irene Miskoff was born Aug. 8, 1924, in Freeborn. She was the daughter of George and Julia (Jacobson) Hinkley. Gladys was baptized as an infant and was later confirmed in her faith as a youth. She received her education in Freeborn and was a graduate of the Freeborn High School class of 1942.

On July 24, 1944, Gladys was united in marriage to William Miskoff at the parsonage in Tucson, Ariz. This marriage was blessed with one daughter, Sharon Kay Miskoff.  Gladys and William Miskoff resided in Hutchinson. They shared 70 years of marriage.

Gladys enjoyed playing cards, baking and cooking. She especially enjoyed spending time with her family and babysitting her great-grandchildren.

Gladys is survived by her husband, William Miskoff, of Hutchinson; grandchildren Michael Brady (Cassidy) of Boulder, Colo., Briten Gilbertson (Cassie) of Prior Lake and Natasha Zahler of Cambridge; great-grandchildren Zackary, Noah and Hannah Zahler and Caden, Gavin and Mason Gilbertson; along with many other relatives and friends.

Arrangements were with Dobratz-Hantge Chapel in Hutchinson. An online guestbook is available at www.hantge.com. Please click on Obituaries/Guest Book.