Funeral services for Glenn L. Doty, 89, of Albert Lea will be at 2 p.m. Saturday at Calvary Baptist Church. The Rev. Clayton Balsley will officiate. Interment will be in Graceland Cemetery with military honors accorded by the American Legion and VFW honor guard. Visitation will be one hour prior to the service at the church. Bayview/Freeborn Funeral home is assisting the family. Online condolences are welcome at www.bayviewfuneral.com. 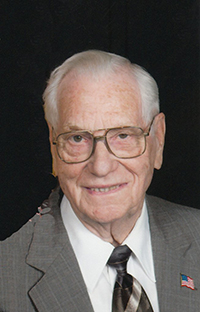 Glenn Louis Doty was born July 25, 1925, in Cedar Rapids, Iowa, to Louis E. and Emma E. (Hauskins) Doty. He was raised by his mother and her husband, Russell Haukoos. They lived in the Walters area. He went to many rural schools for his education. Even at a young age he worked for many area farmers. When Glenn was 15 he went to a sheet metal school and then got a job at Northwest Airlines in St. Paul and worked there until he enlisted in the Marine Corps at 17.

He served in the Pacific Theater during World War II. He was in the battle of Okinawa, and from there went on to Japan and China. He came home in April of 1946. He received the Presidential Unit Citation and a Good Conduct Medal. Glenn was discharged as a staff sergeant.

In June of 1947 Glenn married Elinor Logan at the Rice Lake Evangelical Church. They have lived in Albert Lea since they were married. They joined Calvary Baptist Church in 1954. Glenn was active there as a deacon and an usher, both for many years. He was on the Youth for Christ board of directors for 10 years. During their marriage Glenn and Elinor had two children, Dan and Linda Doty. He belonged to the American Legion and the VFW.

Glenn worked at Seliger Motor Co. and then started working at the Albert Lea Fire Department in 1952. He worked there until 1983 when he retired as a captain. During that time he also worked part time as a salesman for Dave Syverson Ford, and worked there full time from 1983 to 2000.