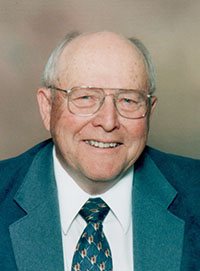 Funeral services will be at 10:30 a.m. Wednesday at Salem Lutheran Church in Lake Mills with the Rev. Peter Soli officiating. Burial will take place in Salem Memorial Cemetery in rural Lake Mills. Visitation will be from 4 to 7 p.m. Tuesday at Mittelstadt Funeral Home, 902 E. Main St. in Lake Mills, and will continue one hour prior to services at the church on Wednesday.

During his senior year of high school, Howdy began driving bus for LMCS — a job which he had for a total of 52 years. It was this job that led him to meet a new first-grade teacher who later became his wife.

On Dec. 30, 1959, Harlan was united in marriage with Beverly Ann Orsland in Sioux Rapids, Iowa. The couple made their home in rural Lake Mills where they raised their four children.

In addition to driving a school bus, Howdy had worked at both Deluxe Products and the Lake Mills Creamery, but nothing compared to farming. He was a lifelong farmer, enjoying what he loved his entire life. Howdy was fortunate and never had to retire from his beloved farming.

His hobbies varied and included hunting and fishing, softball leagues, collecting antique tractors — only the green kind, family pizza parties, the 79ers — a church group he enjoyed, but mostly spending time with his children and grandchildren. He could be found cheering them on in their many activities, whether sports, music or church, all while visiting with those seated nearby. Howdy was never at a loss for words and made people feel welcomed wherever he was. Howdy also made time to serve on the elevator board, co-op board and the soil conservation board. He and Bev have many wonderful memories from trips taken to Israel, Norway for a family reunion, a bus trip to New York and vacationing in Hawaii.

Howdy is lovingly survived by his wife of nearly 55 years, Beverly Evenson; and four children, Brad (Darla) Evenson and their family Amelia, Hannah, Scott (Sophia) Abbey and Drake Abbey, David (Julie) Evenson and Daniel Evenson, all of Lake Mills, and Sonja (Lorn) Wallin and their family Michael, Daniel, Andrew and Alise of Glenville. He is also survived by two sisters, Viola Brubak of Northwood and Marilyn (Milton) Johnson of Clear Lake, Iowa; brother- and sister-in-law David and Betty Orsland of Hendersonville, Tenn.; and many nieces, nephews, extended relatives and friends.

He was preceded in death by his parents Henry and Beulah Evenson; five siblings and three brothers-in-law, Elaine and Clifford Sime, LaVonne Evenson, twins Arthur and Arlotte Evenson, Loma Evenson, Ray Brubak and Richard Brictson; and a nephew, Jim Brictson.