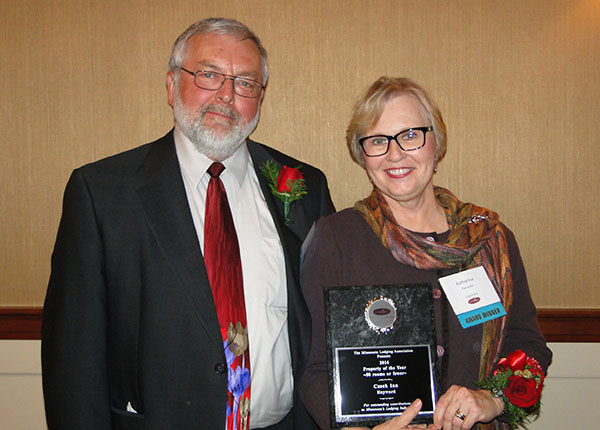 The Czech Inn of Hayward was awarded Property of the Year by the Minnesota Lodging Association. – Provided

HAYWARD — The Minnesota Lodging Association awarded a Hayward bed and breakfast as Property of the Year earlier this month during a ceremony in White Bear Lake.

The Czech Inn Bed & Breakfast & Retreat, which opened in 2012, won the category for a company with 50 rooms or less. There was a separate award for larger companies.

“We were just shocked,” said co-owner Katherine Pacovsky. “We had no idea we had been nominated or anything.”

Pacovsky and her husband, Joe, began building the inn, at 19158 800th Ave., in April 2011 after retiring from careers in central Wisconsin. They had purchased the family farm where the inn now sits in 1984. It had previously been owned by Joe’s grandfather, who purchased the land in 1939.

The Mission Style lodge honors Joe’s heritage and features five guest rooms, each with a different decorating theme and private bathrooms, along with common areas including a library, dining room, parlor, kitchen, and a craft or meeting room for gatherings.

It also features antiques from Katherine’s own homes growing up, along with other antiques she’s found.

A news release from the Lodging Association states the inn focuses on comfort and a “homey” atmosphere.

“Quilting and scrapbooking groups have found a great spot to visit, with the inn’s 750-square-foot meeting space with a fully equipped kitchen,” the release states.

The inn features a friendship garden with plants given by guests and sometimes even planted by guests.

“Joe and Katherine have found their new life to be most inspiring and rewarding, and they’re always ready for guests with coffee on and kolaches waiting,” according to the release.