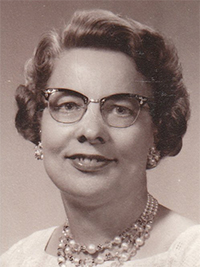 Visitation will be one hour prior to the service at the church. Online condolences are welcome at www.bayviewfuneral.com.

Henrietta Sedmurna Lee was born May 9, 1917, the third daughter of Henry and Sena (Thompson) Langlie. She was baptized and confirmed at the First Lutheran Church of Ellendale. She graduated from Ellendale School in 1935.

In 1937 Henrietta was united in marriage to Paul Lee of Owatonna by the Rev. Knutson, the pastor of First Lutheran Church in Ellendale. In the early 1940s Paul accepted a position with the Post Engineers in Seward, Alaska, where they lived for 15 years. They then moved to Fairbanks so their son could attend a bigger school.

In 1973, after losing their son Curtis and going through the flood in Fairbanks, Henrietta and Paul moved to Montana. They moved again, in the early 1990s, to Minnesota and they enjoyed being back with family and friends. Paul passed away in 2004. During the 1990s her brothers Arvid, Athan, Howard, Leighton and Eugene as well as her sisters Orpha and Arvilla all passed away. This left Henrietta as the last survivor of Henry and Sena Langlie.

Survivors include her sisters-in-law and many nieces and nephews.