Memorial services for Joan D. Hagen will be at 1 p.m. Saturday at the Bonnerup Funeral Service chapel in Albert Lea. Visitation will be one hour prior to the service. Deacon Michael Ellis will officiate. Interment will take place at Greenwood Cemetery in Glenville. 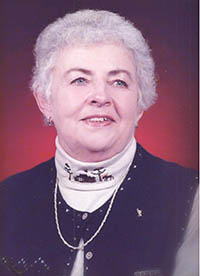 Joan was born June 16, 1933, to Frank Dudley Jr. and Margaret (Kraft) in Omaha. She attended and graduated from North Omaha High School. On Feb. 18, 1955, Joan was united in marriage to Charles Hagen in Omaha. The couple moved to the Glenville area in 1969.

Joan was a member of St. Theodore Catholic Church. In her free time she enjoyed reading, crossword puzzles, gardening, baking her famous cookies and traveling to the family cabin up north. She was a housewife by trade and always kept the house clean. She loved to visit with people and was always willing to help. She was a caretaker for not only her family but for other members of the Glenville community as well. Family was Joan’s main focus, and she especially loved her children, grandchildren and great-grandchildren.

She is preceded in death by her husband, Charles; parents Frank and Margaret; and a brother, Norman Dudley.

Those left to cherish her memory include her children Terri (Kevin) Walton of Glenville and Mark Hagen of Hayward; grandchildren Brooke (Jeremy) Larsen of Glenville, Heather Hagen and significant other, Dylan Schneibel, of Woodbury and Janell Hagen and significant other, Brock Moyer, of Albert Lea; great-grandchildren Maraya, Jocelyn, Amiah and Hadley; and her “grand-dogs” Daisy, Strider, Bentley, Cooper and Sadie.

She will be deeply missed by all who knew her.