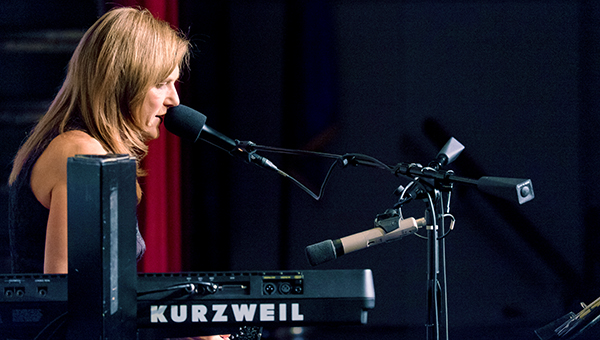 Lauren Pelon plays instruments from all over the world in her performance. – Courtesy of Gregory Harp

A concert about peace within the self, nature and world will be coming to Albert Lea this week.

Lauren Pelon, a native of Holland, Mich., will perform her program “Listening for Peace” at 7 p.m. Thursday at the Albert Lea High School auditorium. This concert is part of a 22-city tour throughout Minnesota through the Minnesota State Arts Board. 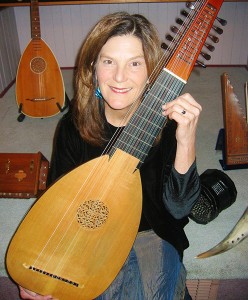 Lauren Pelon holds an archlute, one of the many instruments she plays. The archlute is a European stringed instrument developed around 1600. Provided

Pelon was born in Michigan but has also lived in San Francisco, Seattle, Alaska and Boulder, Colo. She has been in Red Wing since 1995.

When she was in high school she began playing recorders and studied music at Western Michigan University. After graduating she moved to San Francisco and worked with a recording workshop, and has been adding and collecting instruments ever since. That was in the 1970s.

Some of the instruments she can play include the recorder, crumhorn, shawm, Native American flute, ocarina, penny whistle, guitar, lute, lyre, archlute, concertina, electric wind controller and mini pedal board.

Much of Pelon’s music is also vocal, including spoken word. She said the music and instruments she uses combine different cultures and time periods, from very ancient to very modern.

Pelon has four other programs she performs besides “Listening for Peace.” She doesn’t perform this program as much, and this specific program was set up for the Albert Lea and Savage concerts.

The other programs Pelon performs are as follows:

• “The Living Roots of Music,” which explores the history of music;

• “Music in the Backyard & Front Porch,” which looks at American music;

• “Earth Tones,” which celebrates the Earth and

Pelon said the response from this tour, so far, has been “overwhelmingly positive.” She has been all over the state and said she’s met a lot of wonderful people as well as worked with musicians in some communities.

That trend will continue with Albert Lea. Pelon’s second to last song, “For a While,” which she wrote, will be performed with the Riverland Community College choir.

Besides touring in every state in the United States and in almost all the provinces in Canada, Pelon has toured in the United Kingdom three to four times and in New Zealand and Australia eight times. She has also performed concerts in China, Russia and Kazakhstan.

In October, Pelon was on tour in the Appalachian Mountains area out to the North Carolina coast, then returned to Minnesota for her Minnesota State Arts Board Tour. Looking to the future, Pelon will begin touring again out of state in 2015.

What: Listening for Peace