Throughout the 1930s, Shirley Temple sang and danced her way into the hearts of depression-weary movie audiences. A decade later, adorable Margaret O’Brien endeared herself to millions seeking Hollywood diversions as World War II came and went. 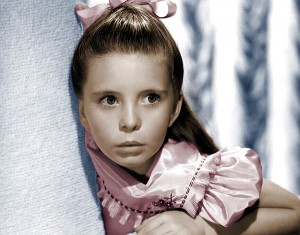 Far from retired at 77, this year O’Brien completed work on a new film version of Dr. Jekyll and Mr. Hyde, due for release next spring, which also features Mickey Rooney.

O’Brien’s connection to Rooney goes back to the 1941 film “Babes on Broadway.”

“That was my first movie when I was only 3 years old,” said O’Brien. “Mickey and I didn’t have any scenes together, but I can still remember him walking by and saying ‘Hello, what a cute little girl!’”

Starring in almost 20 films throughout the 1940s, little Margaret astonished audiences with a display of adult emotions though she was not yet even a teenager.

In her teen years, O’Brien’s cuteness blossomed into youthful beauty. At 19, a stunning photo was featured on the cover of Life Magazine. However, throughout the ’50s, she only appeared in three feature films including the horse racing drama “Glory.”  But, she says, it wasn’t because her ‘cuteness factor’ had evaporated.

“Movie contracts were ending and television came along,” she explained. “My mother thought I should get into television, so I worked on many great shows from that period.”

For much of her adult life, O’Brien has also been committed to charitable causes, including AIDS awareness and programs that assist actors.

And while she considers herself conservative, O’Brien dresses flamboyantly and still sports a nose piecing acquired some years ago.

“I love creative fashion and hunting for unusual items to make jewelry from. That’s about as offbeat as I get!” she said. “My mother raised me to be pretty well-grounded, so I never had the problems that a lot of child actors faced. Acting has been a wonderful career, and still is.”

Nick Thomas teaches at Auburn University at Montgomery, Ala., and has written features, columns and interviews for over 450 magazines and newspapers.