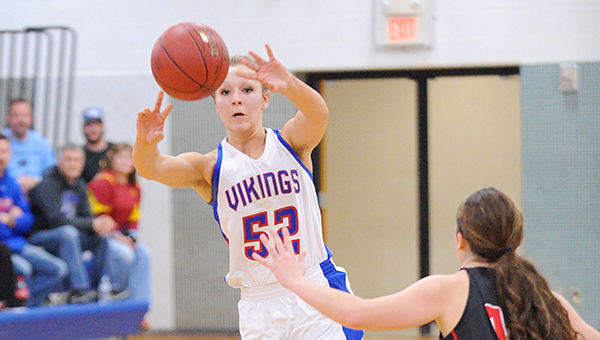 Hattie Davidson of Northwood-Kensett passes the ball on Nov. 25 against Hampton-Dumont. Davidson scored 18 points in the game and averaged 29.5 points per game through the first six games, which is second in Class 1A and third in Iowa. — Micah Bader/Albert Lea Tribune

Leaders on the hardcourt emerged before winter break in the Tribune’s seven-team coverage area.

The following is a recap of girls’ basketball this season:

Breaking in a new backcourt has been a learning process for the Tigers. Rachel Rehnelt, Katie Rasmussen, Alli Christenson and Quinn Petersen have worked to fill in for two 1,000-point career scorers on the perimeter.

The Tigers only had one win before the break, but last season began much the same way before a turnaround: Albert Lea started 2-6 but went on to win four straight games and beat Waseca in the Section 1AAA quarterfinals.

The Knights have found a compliment to senior center Liesel Theusch, who has been averaging 10.5 points and 8.8 rebounds per game in the paint.

Erika Bute, a five-foot-five-inch eighth-grade guard, has been lighting up the scoreboard with 19 points, 6.3 rebounds, 2.3 assists and 2.3 steals per game. She led Alden-Conger in scoring in both of the team’s wins. Bute posted a season-high 31 points in a 73-50 home win on Dec. 9 at Lake Crystal-Wellcome-Memorial, and she scored 27 on Dec. 12 in a 53-34 win at Madelia.

The Wolverines haven’t won a game since Dec. 8, 2012, but they’ve already had a closer game this season than all of last year.

Glenville-Emmons played competitively against Schaeffer Academy on Dec. 11 in a 47-35 loss. Sophomore guard Payton Cech emerged as the team’s leading scorer in that game, and she scored a season-high 19 points in the Wolverines’ 62-40 home loss on Dec. 22 against Lanesboro.

The last two years of undefeated records and state championships have been a tough act for the Panthers to follow with Carlie Wagner suiting up for the Minnesota Gophers.

The Panthers bounced back with a 73-45 win at Maple River, lost against Tri-City United and Blooming Prairie and beat Medford.

Maddie Wagner led the Panthers past Medford with a team-high 19 points. Gretchen Ramaker and Kayley Camerer also scored in double figures, while Kelli Harrington and Ryann Hagen tied with a team-high eight rebounds.

After USC started the season with two close losses — the Rebels were leading at halftime in both games — the team has won two of its last three games.

Anissa Janzig broke her own school record set last year in the first round of the Subsection 2A tournament with 33 points on Dec. 15 against a Janesville-Waldorf-Pemberton team that is 6-3.

Also playing strong in the paint for the Rebels’ have been Shianne Robertson and Lauren Allis.

In USC’s latest win, a 64-16 home victory over Madelia, Robertson had 17 points and nine rebounds; Allis had 14 points, eight rebounds and four blocks.

Lake Mills began the year with wins over Newman Catholic and North Iowa. Four losses followed, but the first three were competitive losses by six points or fewer.

The Bulldogs rebounded with dominating wins over Belmond-Klemme and Eagle Grove to get back to .500.

Sophomore Lexi Groe leads the team on the glass with 10.2 boards per game, and senior Mary Evans has well-rounded stats with 7.8 points and 8.6 rebounds per game.

After a 67-44 loss in its season opener, the Vikings reeled off five straight wins with a heavy dose of Hattie Davidson.

The junior guard’s scoring average of 29.5 points per game is second in Class 1A and third in the state. Shelby Hembera of Class 1A’s Cedar Valley Christian leads the state with 34.0 points per game; Elle Ruffridge of Class 3A’s Pocahontas Area is second with 29.8.

Sammi Butler, Shelby Low and Shelby Hagen are each averaging over five points per game.

Hagen leads the team with 7.2 rebounds per game, and Davidson is second with 5.3.