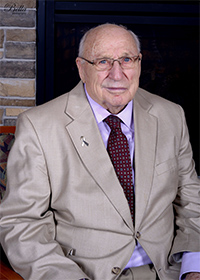 of Mount Carmel Catholic Church in Easton. Visitation will be from 2 to 4 p.m. Jan. 18, 2015, at the Bruss-Heitner Funeral Home in Wells, and will continue one hour prior to the service Monday at the church. Interment will be OLMC Cemetery, and the Rev. Jason Kern will officiate. Memorials are preferred to Our Lady of Mount Carmel Catholic Church or Northfield Hospice. Please see www.brussheitner.com to leave online condolences. Bruss-Heitner Funeral Home of Wells is assisting the family.

Milton was born April 19, 1924, in Easton, the son of Alfred and Helen (Hefner) Rauenhorst in Barber Township, Faribault County. He was proud to graduate from Wells Public High School in 1941. He was united in marriage to Kathryn Grise on August 6, 1955, at St. Peter and Paul Catholic Church in Blue Earth. He was lifelong member of Our Lady of Mount Carmel Church in Easton.

He was a lifetime dairy farmer on his family farm near Easton. In his retirement he worked as a driver for the Minnesota Department of Human Services, driving patients to their clinic appointments. He worked for an auto dealership, driving cars from Minneapolis to Wells. Milt stacked hay for neighbors. He was a member of the Foresters for 75 years and served as a secretary for the organization. He also monitored the weather for a local insurance company.

Milt enjoyed traveling extensively throughout the United States, Canada and Europe, as well as cruises. He enjoyed playing cards and actively enjoyed all of his seven grandchildren. He cherished the Easton community and his German heritage.