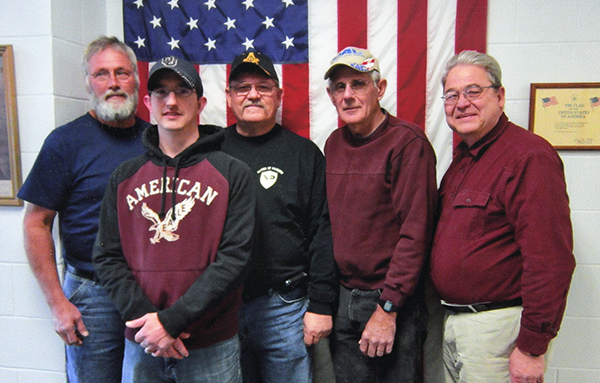 Adam Hester, who suffered two concussions while serving in Iraq in 2006, was awarded a $4,175 grant through the Nation of Patriots in a ceremony at the New Ulm Holiday Inn.

The Nation of Patriots was founded in 2009 as a way to financially assist combat wounded veterans with dependents who were coming home from war with unmet financial needs. The tour of the American flag begins each year on Memorial Day.

Participants escort a flag that has been flown in combat through 48 states, typically for 100 days. One hundred percent of the funds raised are awarded to combat-wounded veterans.

The New Ulm Journal stated Hester suffered his first concussion from an improvised explosive device during an explosion in Fallujah, Iraq, on Aug. 25, 2006.

A part of the 1st Combat Engineer Battalion, 1st Marine Division, Hester was one of four Marines in a Humvee that was blown apart by the explosion.

The newspaper stated despite wearing a flak jacket, helmet and eye protection, he suffered a Level 3 concussion in the blast and was knocked out for about five minutes.

Less than a week later, another IED exploded near a Humvee he was riding in, and Hester suffered a lesser concussion.

He was discharged from the Army with 70 percent combat disability and continues to deal with migraine headaches, according to the Journal.

Hester is studying engineering at South Central College with plans to continue his studies at Minnesota State University, Mankato. He works as a quality technician at BIC APP in Sleepy Eye, and he and his wife, Jessica, have 5-year-old twins.

Local organizers said the first two years Albert Lea riders participated in the Nation of Patriots Tour, it rained all day while riders escorted the flag to Waukon, Iowa.

In 2012, efforts by Albert Lea volunteers raised $1,575, which went to support Ronnie Moats of LaCrescent, who had been blown up by an IED explosion.

In 2014, they raised their highest amount to date.

Bergstrom said the 2015 Nation of Patriots tour will occur in late August.

“It has truly been an honor and privilege to work with the Nation of Patriots to honor the American flag and our veterans,” Bergstrom said.

The 2015 schedule will be posted on the Nation of Patriots website at NationofPatriots.org.