ST. PAUL — State lawmakers likely will be asked to extend a tax exemption on 2018 Super Bowl tickets to cover tickets to related events as well.

Such a move would cost the state about $400,000 in foregone revenue, according to documents released by the Revenue Department following a public-records request from St. Paul-based Public Record Media. 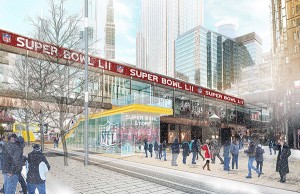 Michele Kelm-Helgen, chairwoman of the Minnesota Sports Facilities Authority, confirmed last week that stadium officials and leaders of the Super Bowl organizing committee plan on making requests. Any additional tax exemptions for the National Football League related to the 2018 Super Bowl would probably be passed next year.

Gov. Mark Dayton said he wants to consult with both Democratic and Republican lawmakers in both chambers before committing to supporting additional tax exemptions.

“There will probably be a very strong sentiment for just leaving things the way they are,” he said. “They’ll have to make a very convincing case for why they need the additional money, and also what the economic return to the state would be for that investment.”

Minneapolis’ Super Bowl bid was accepted in May by league owners, and promises made to the NFL have remained unclear since then, including the amount that will ultimately be contributed by taxpayers.

Officials within the Minnesota Sports Facilities Authority and others involved have declined to share that information with the public, saying the details are being concealed for competitive reasons.

The NFL maintains a lengthy list of tax exemptions and refunds it requires from Super Bowl host cities, including those related to tickets, parking and taxes paid by its vendors for a variety of expenses, according to the revenue documents. But Kelm-Helgen said the state didn’t agree to all of the league’s demands.