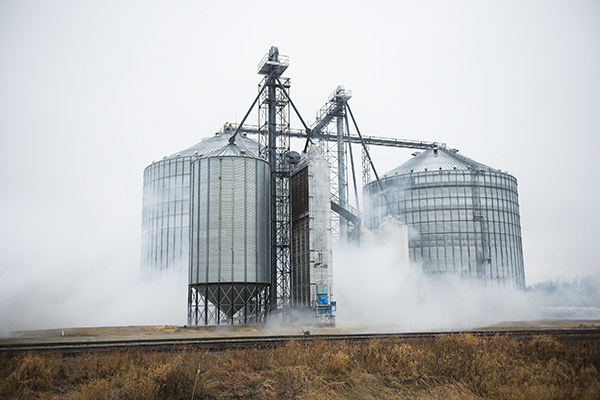 Anhydrous ammonia billows past grain bins at the WFS grain elevator Monday in Clarks Grove after a leak was discovered in a the tank of a semi. Part of Clarks Grove was evacuated as the gas can be harmful and potentially lethal if breathed in. – Colleen Harrison/Albert Lea Tribune

CLARKS GROVE — Fifteen homes were evacuated Monday morning after a leak was discovered in an anhydrous ammonia tank on a semi in Clarks Grove. 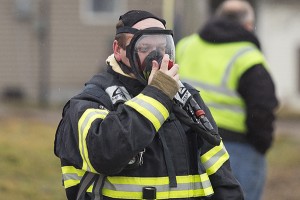 The leak was at Clarks Grove Fertilizer, next to Watonwan Farm Service.

Three people in the office directly behind the semi safely exited the building, along with other workers at different parts of the plant, said Freeborn County Emergency Management Director Rich Hall.

One firefighter was treated at the scene by Gold Cross paramedics for a sore throat after breathing from the cloud of ammonia, Hall said.

The leak began during ammonia conversion at the plant shortly after 11 a.m. The semi transporting the anhydrous ammonia was with CHS Transportation, he said.

The homes were evacuated because of the possible health effects that can come from exposure to anhydrous ammonia. Symptoms include burning of the eyes, nose and throat after breathing even small amounts. 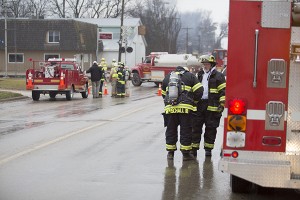 Firefighters from Geneva, Clarks Grove and Hartland suit up before responding to a leak in an anhydrous ammonia tank on a semi at Clarks Grove Fertilizer near the grain elevator. – Colleen Harrison/Albert Lea Tribune

The homes evacuated were in the northwest part of the community, and a large white cloud of chemicals could be seen traveling west of the WFS operation.

The road was closed west of the railroad tracks alongside the leak, and all railroad traffic to Clarks Grove was halted while the leak was addressed. The rail line was open to full rail traffic at 2 p.m.

Hall said one team of firefighters shut off the leaking valve to stop the spread of chemicals, while another team stood by in case of any injury. Paramedics also were nearby as a precautionary measure.

People were able to return to their homes at 1:30 p.m. after a firefighter checked the air quality in the area.

Fire departments from Clarks Grove, Hartland and Geneva were in the city to deal with the leak. Freeborn County Sheriff’s Office deputies were on site, too, along with a state Homeland Security and Emergency Management official, who had been slated to attend another meeting that afternoon. 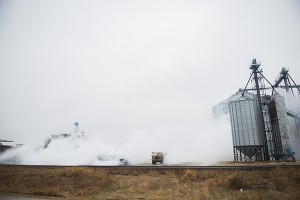 Anhydrous ammonia encompasses Clarks Grove Fertilizer Monday after a leak in the tank of a semi on the grounds. – Colleen Harrison/Albert Lea Tribune

Hall said a chemical assessment team from Rochester was ready to respond but was later called off before arriving in town.

Resident Ray Hanson, who lives on Second Street near the fertilizer plant and WFS, said he went to get his mail from the post office when he saw multiple sheriff’s deputies and responders drive past.

He said he knows the dangers of anhydrous ammonia firsthand and recalled an incident several years ago he had when working at the plant, when it was called the Clarks Grove Elevator.

He said he once breathed in just a few vapors of the gas and “was on the ground gasping for air.”

A Clarks Grove Fertilizer statement issued Monday indicated the incident is under investigation. The company thanked the fire departments that responded.

Clarks Grove Fertilizer is a partnership owned by WFS in Truman and Central Valley Cooperative in Owatonna.

Look to the Tribune for more details as they become available.