Memorial services for Patricia A. Ferguson, 79, of Albert Lea will be at 1 p.m. Saturday at Bayview/Freeborn Funeral Home. The Rev. Curtis Zieske will officiate. Burial will be at Grandview Memorial Gardens in Rochester. Friends may greet the family one hour prior to the services at the chapel. Online condolences are welcome at www.bayviewfuneral.com. 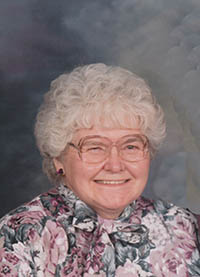 Patricia Ann Ferguson was born Oct. 20, 1935, in Albert Lea, the daughter of Harry and Ann (Terpstra) Rice. She grew up in the Hollandale area and attended school through the eighth grade, and then attended and graduated from Albert Lea High School. Patricia attended the Ritter Beauty School.

She was united in marriage to Robert Ferguson April 27, 1986, at Lunder Lutheran Church. Patricia worked at Progress Casting. She enjoyed reading, knitting and crocheting, watching and attending her grandchildren’s sporting events and watching game shows. She was a member of Trinity Lutheran Church and the Eagles Club.

Patricia was preceded in death by her parents; husband, Robert Ferguson; and brother, Ron Rice.