Memorial services for Robert M. Christianson, 90, of Albert Lea will be at 11 a.m. Saturday at First Baptist Church in Albert Lea. The Rev. Clayton Balsley will officiate. Interment will be in Clarks Grove Cemetery at a later date. Military honors will be accorded by the American Legion and VFW honor guard. Friends may greet the family one hour prior to the service. Online condolences are welcome at www.bayviewfuneral.com. 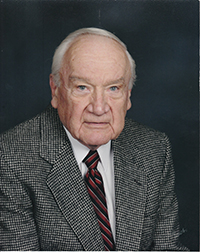 Robert M. Christianson was born Aug. 17, 1924, on a farm south of Clarks Grove, the son of Walter and Louise (Dahl) Christianson. He grew up near Clarks Grove, graduated from Albert Lea High School, Bethel College and the University of Minnesota. Robert served in the U.S. Navy as a medic from 1942 to 1945 and was in New Guinea and Japan. Following his time in the service he worked for Ellendale High School teaching math and science. He then worked for Richfield High School as a math and biology teacher, a high school counselor, chairman of the science department, chairman of the counseling department and administrative assistant to the principal.