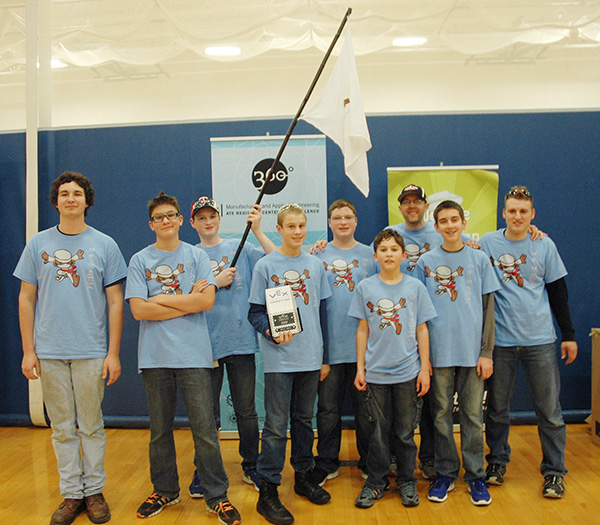 Mysterious George, a robotics team from Austin, won the Judges’ Choice Award at the Dream It. Do It. Southern Minnesota VEX Robotics Tournament on Dec. 13. They are shown here holding their team flag, something that helped them get their award. — Provided

A team of students from Austin won some awards at the Dream It. Do It. Southern Minnesota VEX Robotics Tournament, which was at Riverland Community College on Dec. 13.

The tournament has led VEX Robotics in Minnesota, according to a press release.

The team from Austin — Team 8091, named Mysterious George — won the Judges’ Award, as the judges were impressed with their team development plan and the level of energy they had at the tournament.

This team was also a tournament semi-finalist.

All of these teams qualified for the Dream It. Do It. Minnesota State Tournament, which will be held at St. Cloud Technical and Community College.

Teams will compete at this tournament for invitations to the world championship.

To prepare for the tournament, the teams designed and built robots using the VEX Robotics Design System to compete in the game Skyrise, using their knowledge of science, technology, engineering and math, or STEM, according to a press release.

Several of these teams, along with other local teams, receive support from Riverland Community College by attending scrimmages and receiving robotics kits as part of the college’s work with 360º, according to a press release.

“Students are applying STEM skills like mechanical design and programming that are used in high-tech, well-paying manufacturing careers, along with teamwork and critical thinking,” said Peggy Young from Riverland Community College in a press release. “Robotics provides a great opportunity for students to be prepared to enter programs like Riverland’s and enter the workforce.”