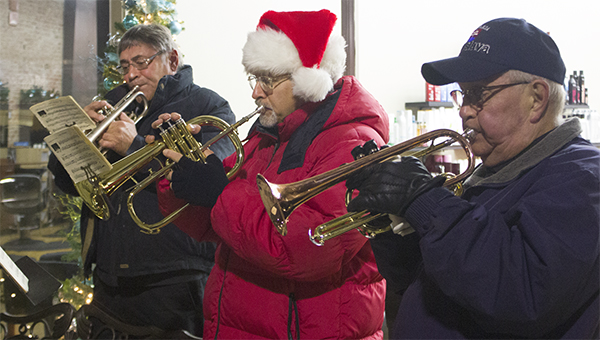 Families come out for holiday fun

The Christmas spirit abounded in downtown Albert Lea Thursday evening as residents of all ages flocked to the heart of the city. 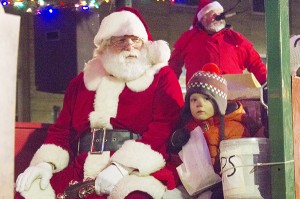 Santa Claus and Charlie Murray prepare for a ride on a horse-drawn trolley Thursday evening in downtown Albert Lea. Dozens of people took advantage of the trolley rides during the Holiday Bazaar on Broadway. – Sarah Stultz/Albert Lea Tribune

During the second annual Holiday Bazaar on Broadway, people could take part in multiple activities, including a cookie bake-off, a trolley ride and other entertainment.

“It’s wonderful to see all the families out,” said Susie Petersen, executive director of the Albert Lea Convention and Visitors Bureau.

Three hundred luminarias lined Broadway as people walked in and out of the downtown businesses. In addition to having specials at their own businesses, many store owners hosted artisan crafters and home-based businesses.

The Salvation Army provided popcorn and hot chocolate near the corner of William Street and Broadway and had a bell ringer collecting donations. Santa Claus visited with people young and old. 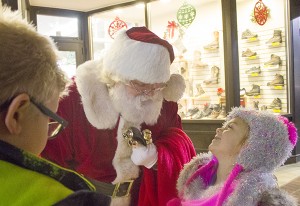 Petersen said she loved seeing the street filled with cars.

At the Copper Kitchen, volunteers with United Methodist Church had a cookie bake-off set up, and for just $3 people could sample 17 different kinds of cookies. It was a fundraiser for the church’s youth mission trip.

“It’s been fun,” said Anita Culp, one of the youth leaders. “Lots of little kids.”

Copper Kitchen owner Joey Neely praised the event, saying it drew numerous people into the store. He said he has enjoyed a large turnout not only during that event but during the holiday season as well.

Joanna Dye attended the bazaar with her two children. She said she grew up in Albert Lea, and now they are as well.

“I want them to experience the small-town experience,” Dye said.

A worker at 112 on Broadway, she said she also wanted to support the downtown businesses.

The event came two weeks away from Christmas.