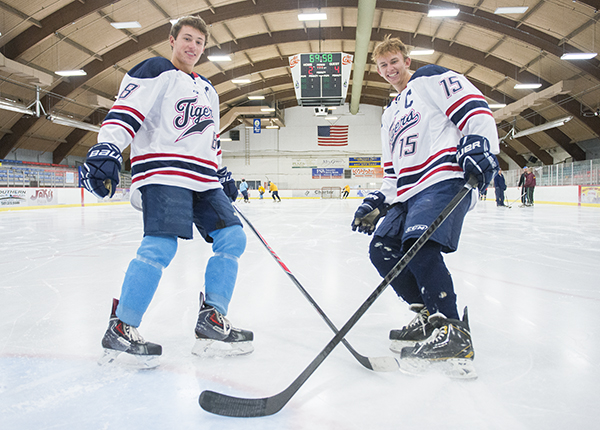 Lords of the rink

“We’ve been playing well on defense, and our forwards are coming together,” said Tigers defenseman Brady Loch. “We’ve been scoring some goals and picking up some wins.”

“They’ve done everything that we’ve asked of them, and they get the guys ready for the games,” he said. “They’re just doing a fine overall job.”

Each captain has contributed to the varsity scoresheet since their sophomore year. 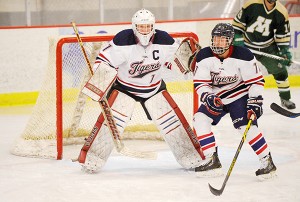 In the Tigers’ wins over Faribault, Red Wing and Rochester Mayo, Matz had 74 saves and a .937 save percentage. According to Nystrom, Matz has flu-like symptoms, and will rejoin the team when he is ready. In his absence, sophomore Ben Witham posted a shutout Tuesday in a 4-0 win over New Ulm.

Claassen, a wing, has been a sharpshooter on the varsity roster for the last three years. As a sophomore, he was third on the team with eight goals and two assists. Last year, Claassen was in the top five in goals scored and assists. He matched his previous goal total and pushed his assist total to seven. This year, he leads the Tigers with four goals and is tied for second on the team with three assists.

As a defenseman, Loch’s contributions don’t always make the score sheet. Nonetheless, his numbers showed improvement. Loch bolstered his assist total from one as a sophomore to four last year. This year, he has one assist and two goals, including Albert Lea’s only power-play goal of the season.

In the offseason, Nystrom said the team competes in a summer league at Mankato, and the captains led the team there as well.

“Last summer, we had Alex, Brady and Garrett at all of our practices,” Nystrom said. “They were all training and weightlifting.”

The Tigers’ highlight of the season was a 2-1 win over Rochester Mayo on Dec. 11 at Albert Lea City Arena. Not only were the Spartans undefeated in the Big Nine Conference before the game, Nystrom and Mayo coach Lorne Grosso played together in the ’60s under head coach John Mariucci at the University of Minnesota.

“There’s a lot of history behind that Mayo game,” Nystrom said. “That’s not just because Grosso and I played on the same line together in college. I think between the two of us, we’ve probably scrimmaged or played each other close to 150 games.”

The players were aware of the friendly rivalry as well.

“Playing against his former teammate is pretty fun,” said Claassen.

“I like playing for him,” said Loch. “He definitely knows what he’s talking about.”

Next, the Tigers host Austin at 1 p.m. Saturday. Albert Lea will look to add to 16 straight wins over Austin.