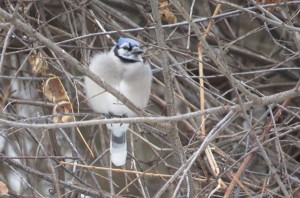 “Everything is nearly copacetic. There is a day for everything. Today is the day for chocolate pudding sandwiches. My alarm clock didn’t go off this morning.”

“No, I hit it with a hammer. Pop is feeling better. He’s become a wiseacre once more. Just this morning, he told me, ‘Play dumb with me and you will win every time.’ Of course, later, he said I was up a tree without a paddle. Pop reads a lot of self-improvement books, but he never gets any better.  He has a real can-don’t spirit. He had some business cards printed with ‘DSFA’ after his name. DSFA — Doesn’t Stand For Anything. He’s not waving with all of his fingers, if you know what I mean. Even though he was student driver of the year in 1953, he still thinks a ‘Vette is a Chevette. Ma had her hair colored yesterday. Pop is at home watching the highlights. He flipped a coin this morning to see if he’d be in a good or a bad mood. The coin fell to the floor and he lost it. You can guess what kind of a mood Pop is in.”

I was enjoying fall’s version of winter. The day was for the birds. Feeders are busy because birds of bad weather flock together. One bird flies, then the others do, too, just in case the first was fleeing from something.

The week had been filled with sharp points. Watching the birds helped. The world was made for all living things. Where else could they live? Most birds are considered ordinary things. The poet Rilke believed that human beings are put on earth in order to experience the beauty of ordinary things.

I believe that every ordinary thing is extraordinary.

“What bird is the snowbird?” Many people think of snowbirds as retirees who avoid the snow and cold temperatures of northern winter by moving south for the season. We have two birds that share that name — the dark-eyed junco and the snow bunting, both worthy of the moniker. The snow bunting, which I remember as a “snowflake,” is a winter beauty of great endurance. Naturalist John Burroughs wrote, “This is the only one of our winter birds that really seems a part of winter — that seems born of the whirling snow, and happiest when storms drive thickest. Its calls, coming out of the white obscurity, are the sweetest and happiest of all winter bird notes. It is like the laughter of children.” Old-timers considered the arrival of snow buntings to be a harbinger of winter. Their appearance in large numbers was considered to indicate the approach of a hard winter. Dark-eyed juncos are called snowbirds because they are more likely to visit feeders on snowy days and that their return from their northern breeding grounds foretells cold and snowy weather. Another reason for the nickname may be junco’s white belly and gray back, which was described by someone identified as Mr. Parkhurst as “leaden skies above, snow below.” Frank Sweet penned this, “Which came first, the birds or the snow? Or was it together they fluttered down? The spirits in white, who seem to know. And talk with the spirits in drab and brown? And which are the merriest ones at play? The flakes which dance to the tune of the breeze, or the birds which flutter and fly away, and chatter and call from the nodding trees?” On a rare occasion, I’ve heard American tree sparrows, often found in the company of juncos, also called snowbirds.

“What are the little moths flying around my house? They’re likely Indianmeal moths, the most common of several similar species that could be your visitors. My mother called them pantry moths. They are attracted to pet food, cereal, birdseed, dry plant material, potpourri, noodles, vegetable seeds, nuts, flour, crackers, cookies, dried fruit, etc. The larvae are little white worms, up to 1/2 inch long, that are often accompanied by a web.

“Did Mozart really have a pet starling?” He did. When the bird died, Mozart wrote this, “A little fool lies here Whom I held dear—A starling in the prime Of his brief time Whose doom it was to drain Death’s bitter pain. Thinking of this, my heart Is riven apart. Oh reader! Shed a tear, You also, here. He was not naughty, quite, But gay and bright, And under all his brag A foolish wag. This no one can gainsay And I will lay That he is now on high, And from the sky, Praises me without pay In his friendly way. Yet unaware that death Has choked his breath, And thoughtless of the one Whose rime is thus well done.”

Pigs first arrived in what is now the U.S. in the 1530s, brought here by Spanish explorers. Eurasian wild boars were imported and released into hunting preserves in the early 1900s. The wild pigs of today are varied combinations of those two.

Frostwork is the intricate pattern of ice on surfaces like windows..

Virga is the precipitation that evaporates on the way down from the clouds.

Blackflies breed in streams and rivers.

Lake effect refers to the snowfall that occurs along the leeward side of the Great Lakes.

Please help us count birds. Count them in your yard, at your feeders or on the road. The CBC will take place Thursday. Please call 507-845-2836 or email snoeowl@aol.com for more information or to report sightings. Thank you.

“To succeed in life, you need three things — a wishbone, a backbone and a funnybone.” — Reba McEntire

“I’m a bit of a caveman. I don’t go out into digital space very often. Rather, I lie facedown on the grass and count how many bugs I can find.” — Dave Matthews