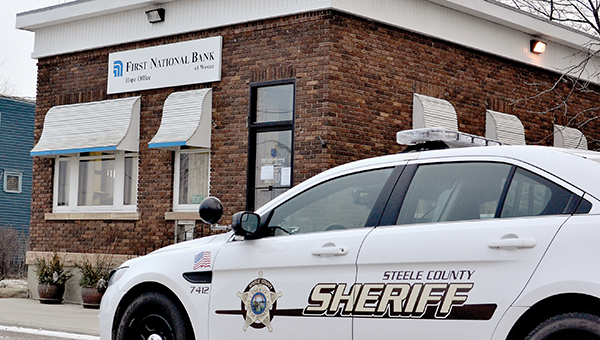 OWATONNA — A suspect in the armed robbery of First National Bank in Hope has been arrested in Texas, Steele County Sheriff Lon Thiele said Saturday morning.

On Friday morning, a lone gunman entered the bank in Hope, pointed a gun at a bank teller and demanded money before making off with an undisclosed amount of cash, law enforcement officials said Friday.

After being handed the money, the man left the bank and fled the scene in what law enforcement officials described as a black Dodge Charger-like vehicle.

Thiele said that the tellers pushed the alarm button immediately after the man left the bank, and law enforcement responded immediately. No one was injured in the incident, he said.

The bank is a branch of First National Bank in Waseca, a family-owned and managed bank that also has a branch in Ellendale. After the robbery on Friday, the Hope branch was closed, with a sign directing customers to the Ellendale branch.

Kyle Loven, a spokesperson for the FBI, said that bank robbery is a federal violation and that the FBI has primary jurisdiction in most cases.

More details of the arrest will be released later.