Typically an IPA or red ale fan myself, I don’t usually enjoy lagers as much. One of my latest exceptions is the latest in Summit’s Unchained series, Herkulean Woods.

The lager is advertised as having a “big malt backbone with a resinous, spicy hop aroma,” and I couldn’t agree more. The Summit Unchained Series gives Summit brewers free rein to create any beer style they want, to rediscover and reinterpret obscure traditional brews or invent their own. The result is small batches with big flavor. 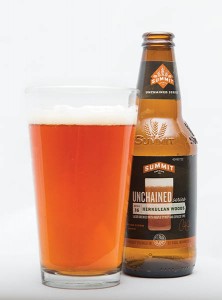 A Minnesota beer through and through, it consists of some regional ingredients like maple syrup from Lutsen and spruce tips from Iowa, as well as locally grown malts. Summit Brewing Co. itself is based out of St. Paul.

Pour the lager into a nice pint glass — which is, of course, the best way to drink real beer — and you’ll see its nice, copper amber hue and the foam head clinging to the glass as it lowers.

The beer’s maltiness has a bit of a doughy smell with hints of the maple syrup and spruce tips that were added to the kettle.

Right off the bat you taste aggressive hop bitterness, quickly followed by an earthy pine taste from the spruce tips and a bit of sweetness coming through from the maple. The sweetness is subtle, a plus in my book as I see no place for sweet beer in my fridge.

The brew’s alcohol by volume percentage is 8.2. To put its bitterness in perspective, the beer is 65 IBUs. By comparison, Miller Lite is about 10 IBUs, Samuel Adams’ Boston Lager is 30 and Summit’s EPA is 45.

The beer is the first offering from Christian Dixon, the newest brewer at Summit. It made its debut this past August.

The lager fits its name as a big, bold and earthy beer with deep flavors. Even with the sometimes aggressive flavors, though, the additions smooth out the ride.

Summit founder and brewmaster Mark O. Stutrud is quoted on Summit’s website as saying, “We never rule out creativity. … our Unchained Series are bold examples of that.”

For a second you may forget you’re drinking a lager, and that’s really the only qualm I have with this beer. I enjoyed it, but I could see lager drinkers not enjoying it as much.