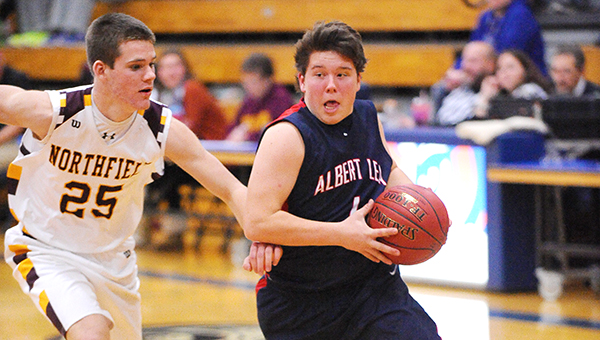 After a strong start in its home opener, the Albert Lea boys’ basketball team’s inexperience showed down the stretch.

“We jumped out with the lead, and I thought our half-court defense was good,” said Albert Lea coach Lucas Kreuscher. “We also rebounded the ball really well in the first 10 minutes.”

The Tigers led by as many as seven points, but Northfield climbed back into the game and capped a momentum-swinging run with four points in the last eight seconds of the first half. The Raiders pulled away in the second half on Tuesday to win 87-55. 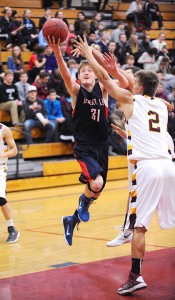 “It really came down to that we got rushed as the game went on,” Kreuscher said. “Too many turnovers and too many quick shots.”

Offensive rebounds after the first 10 minutes were another factor that helped Northfield build its lead. The Raiders had 25 second-chance points, Kreuscher said.

Albert Lea was led by sophomores Dedoch Chan and Jack Buendorf. Chan had a double-double with 16 points, 13 rebounds an assist and a steal. Buendorf had 16 points and six rebounds.

“This was the first game that Buendorf was healthy for,” Kreuscher said. “He stepped up tonight and was aggressive.”

Even though the game was Albert Lea’s second of the season and Northfield’s third, the teams had a common opponent: Rochester Mayo. The Spartans beat the Tigers 81-57 at home in Albert Lea’s season opener and lost 76-68 at Northfield.

After the Rochester Mayo loss, Kreuscher said he simplified his team’s defense.

“Looking back at the Mayo game, I thought our game plan was too complicated for where we are,” Kreuscher said. “Eventually, we’d like to trap and fly around a little bit, but we’re not ready to do that from start to finish yet. We’re playing a lot of guys who don’t have a lot of varsity experience, so we’re learning on the fly.”

Next, Albert Lea (0-2 overall) will play at 7:30 p.m. Friday at Rochester John Marshall (4-0 overall). The Rockets’ only win that wasn’t by double digits was against Farmington, a team that also lost to Rochester Mayo and is 0-4.

The Tigers will play their first nonconference game at 7:30 p.m. Saturday against Kasson-Mantorville. Tipoff for the Albert Lea girls’ game against the KoMets will be an hour and a half earlier. Kasson-Mantorville is 2-0 with wins over Park of Cottage Grove and Pine Island.