Tracy Ann Schilling, 52, of Lyle died Thursday, Dec. 11, 2014, surrounded by her family at her home in Lyle following a long, courageous and inspirational fight against cancer. 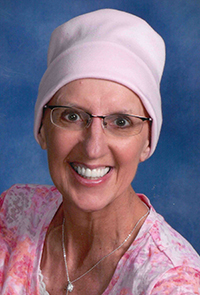 Tracy Ann Cooling was born March 15, 1962, in Austin to Roger and Patricia (Cafourek) Cooling. She was raised in London and graduated with the class of 1980 from Lyle High School.

On Sept. 11, 1982, Tracy and Rodney Schilling were united in marriage at First Lutheran Church in Glenville and resided in London during their 16 years together.  Tracy worked for more than 26 years at St. Mark’s Lutheran Home in Austin. In 2007 she began her employment with Mayo Clinic Health System of Austin Hospice, retiring in 2012 because of her declining health. Tracy had moved to Lyle in 2010.

She was a longtime member of Our Savior’s Lutheran Church in Lyle. Tracy was passionate about raising money for cancer research, and as a result was very active in Lyle Area Cancer activities and her own Halfway to January Cancer Bash. She enjoyed the Minnesota Twins, Nascar, rainbows and cherished time spent with her granddaughter, Haydyn.

She was preceded in death by her father, Roger Cooling; maternal grandfather, Milo Cafourek; and paternal grandparents Alvin and Hazel Cooling.

Tracy was so very grateful for the special care she received from Dr. Kasi and Lilly Sorenson.

Memorial services will be at 3:03 p.m. Friday at Our Savior’s Lutheran Church in Lyle with the Rev. Shari Mason officiating. Tracy’s family will greet friends from noon to 3 p.m. at the church immediately preceding the service. Interment will be in Woodbury Cemetery in Lyle. To support Tracy’s battles with cancer please wear either pink for breast cancer awareness or blue for colon cancer awareness if you are able to attend her service. Memorials can be directed to Lyle Area Cancer or Our Savior’s Lutheran Church in Lyle. Services are prearranged and performed by Worlein Funeral Home of Austin. Condolences may be expressed to the family online at www.worlein.com.