Einertson, the Tribune’s All-Area football Player of the Year, accounted for 1,393 yards of total offense and 20 touchdowns. He had the best touchdown-to-interception ratio in the area with nine touchdowns and three picks.

Peters led the Tribune’s seven-team coverage area with the most carries, 191, and rushing yardage, 913. He also threw for two touchdowns and caught one. Peters contributed on the defensive side of the ball with an area-high three interceptions and had 41 tackles.

Not only did Pederson lead the area with 45 receptions for 557 yards, those were also school records. Defensively, he had 39 tackles with 15 assists. 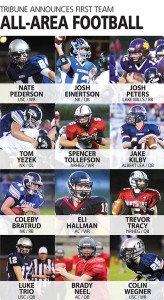 Yezek posted five sacks to lead the area. He also had 59.5 tackles and influenced the game in other ways that weren’t calculated on the score sheet. Teams were forced to decide to run to the other side of the line or take their chances by running right at him.

Tollefson was second in the area in receiving yards with 554 on 29 catches. He led the area with five receiving touchdowns. He accounted for more than half of NRHEG’s total receiving yardage.

Kilby, a two-way starter at quarterback and cornerback, was second in the area with 905 rushing yards and eight touchdowns. He also threw for 416 yards and one touchdown. Defensively, he had 15 tackles, a forced fumble and two interceptions.

Despite battling an ankle injury, Bratrud led the area with 16 rushing touchdowns. He had 695 rushing yards on 140 carries. Defensively, Bratrud had 98 tackles and a sack.

Hallman led the Knights with 392 receiving yards on 17 catches, which was third in the area. Defensively, he had 37 tackles and an interception.

Tracy was one of three area quarterbacks to break the 1,000-yard passing barrier. He finished with 1,075 yards through the air and completed 57-of-115 passes for 10 touchdowns and seven interceptions. He added 134 yards and four touchdowns on the ground.

In his first year as a starting quarterback at the varsity level, Trio had exactly twice as many completions as anyone in the area with 146. He also led the area with 1,847 passing yards and threw 16 touchdowns and 14 interceptions.

Neel was second in the area by completing 73-of-189 passes for 1,401 yards with six touchdowns and six interceptions. He also rushed for 395 yards and five touchdowns on 64 carries.

Wegner broke USC’s record for receptions in a season, and happened to do it the same year that Nate Pederson did as well. Wegner is second in the Rebels history books with 34 catches for 367 yards and four touchdowns. The reception total was second in the area, and the yardage was fourth.

Charron led the Wolverines and the area with 104 tackles. Glenville-Emmons coach Jared Matson said Charron excelled on the offensive line and was the team’s top overall blocker.

Christianson racked up 513 rushing yards, which was seventh in the area, and he did a little bit of everything on defense. He had 51 tackles, eight assists, two fumble recoveries, a forced fumble, a sack and an interception.

According to Bulldogs coach Bill Byrnes, Throne used solid technique as a center with the majority of his snaps in shotgun formation. He was part of the line that blocked for Josh Peters, who led the area in rushing.

Opsahl averaged 17.8 yards per reception and was six in the area in receiving with 19 grabs for 339 yards. He was also eighth in the area in rushing with 75 carries for 503 yards and eight touchdowns.

The area only had four running backs who rushed for 10 or more touchdowns, and three of the four were from Northwood-Kensett. Batton was fourth in the group with 134 carries for 611 yards and 10 touchdowns.

As a fullback, Olsen carried the ball between the tackles for 496 rushing yards and five touchdowns on 104 attempts. As a linebacker, he had 63 tackles, including five tackles for loss.

Hoppe led the Panthers’ ground game with 577 yards and six touchdowns on 118 carries. The rushing total was sixth in the area. As a fullback, Hoppe was the lead blocker for Jason Jongbloedt and Alex Merritt, who combined with 790 yards.

Kingland was fourth in the area with 757 yards through the air. He was 59-of-104 with six touchdowns and seven interceptions. Defensively, he played in the secondary and had eight tackles and an interception.

Kloos was one of three Rebels in the area’s top five for receiving yards with 354 and two touchdowns on 26 catches. He also had 70 tackles, a pair of interceptions and a pick-six.

Stevens was a two-way starter in each game for the Tigers. He led the team in receptions and receiving yards with 12 catches for 138 yards. The Big Nine All-Conference selection had 25 tackles, 12 assists and an interception.

Dahlum led the Wolverines’ secondary with two interceptions, 74 tackles and two tackles for loss. He also rushed for 211 yards and four touchdowns on 36 carries and chipped in 233 receiving yards and a touchdown on 20 catches. Dahlum had 413 return yards.

Dahlby was a three-year starter at center for the Vikings. He helped pave the way for a rushing attack that produced 3,004 total rushing yards.