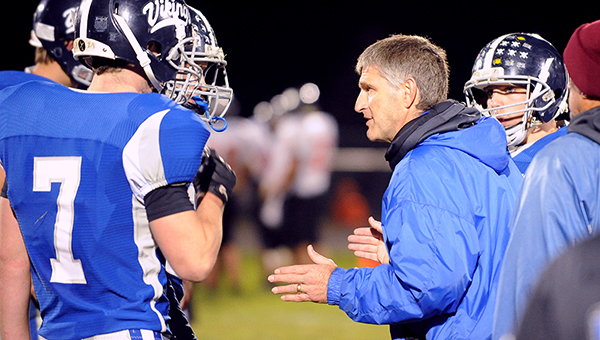 Northwood-Kensett coach Dave Capitani instructs his team during a timeout on Oct. 17 during the Vikings’ 42-36 overtime win against Tripoli. — Micah Bader/Albert Lea Tribune

For the second straight season, the Northwood-Kensett football team made a dent in the 8-Man state playoffs.

Vikings head coach Dave Capitani led the team to a 7-4 record, including a 50-32 win in the first round of the state playoffs over West Central.

Capitani is the Tribune’s All-Area football Coach of the Year.

Coleby Bratrud came into the season as the Vikings leading rusher. In 2013, he had the second-most rushing yardage in the Tribune’s seven-team coverage area: 816 yards on 180 carries. This year, he racked up 695 yards on 140 carries but was slowed by an ankle injury. 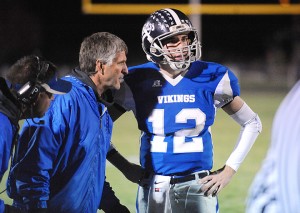 Northwood-Kensett coach Dave Capitani speaks with quarterback Josh Einertson on Oct. 29 during the Vikings’ 50-32 win against West Central in the first round of the 8-Man state playoffs. — Micah Bader/Albert Lea Tribune

Capitani, along with assistant coaches Steve Hartman, Marty Cotter, Daryl Love, Ryan Parker and Jordan Reindl, proved they could develop a strong backfield with the emergence of juniors Keano Batton, Mason Olson and Dawson Van Ryswyk. The trio rushed for a combined 1,273 yards.

Defensively, the Vikings’ defense showed improvement throughout the regular season and into the state playoffs. Against Central Elkader, Northwood-Kensett held Nathan Fitzgerald to 126 yards and one touchdown on 22 carries. That stat may not jump off the page, but Fitzgerald was one of only four running backs in the state of Iowa to break the 2,000-yard barrier, and against Turkey Valley — a team that qualified for the second round of the state playoffs — he rushed for 356 yards and six touchdowns.

Q: To start the season with losses against two state-qualifying teams from the previous season, what did you tell the players to keep their spirits up?

Q: Did you think the 61-8 win at Clarksville, a team that qualified for state this year, gave the team the confidence to win seven of the next eight games?

A: We played very well against Clarksville in all phases of the game. That, as well as how we played against West Bend a team that beat this year’s state champions (Newell-Fonda), gave us a lot of confidence going forward.

Q: How important was the play of Tom Yezek on the interior of the defense and Coleby Bratrud at linebacker?

A: Tom was difficult for anyone to handle and made many big plays for us. Coleby has a real nose for the ball and was our leader on defense. Both players have great motors and give you great effort.

Q: Josh Einertson showed leadership behind center by throwing for 522 yards (fourth in 8-Man District 3) and rushing for 871 yards (sixth in the district). How much do you think his experience from last season helped him make good decisions?

A: There is no doubt that a year of experience helped Josh as a quarterback. He had a better grasp of the offense, and his execution was better as well. He is a smart player, and we’re glad to have him back for another season.

Q: Despite a tough 8-Man schedule, your team held opponents to 22.8 points per game. Were you happy with the defensive effort this year?

A: Yes, I was happy with our defense. I thought we were more disciplined this year and played pretty well most of the year. Injuries late in the season did hurt us some, but obviously that is a part of the game.

Q: What surprised you most about this group?

A: I don’t know that anything surprised me much about this group. They were a fun group who worked well together. They were a real pleasure to coach.

Q: What was your favorite moment of the season?

A: Probably beating Tripoli in overtime — a game that wrapped up second place in the district and a (state) playoff spot.

Q: Where are some areas you think next year’s team can improve?

A: We can improve in all areas, and we need to if we want to win a district title and make a longer run in the playoffs.

Q: After qualifying for the second round of the state playoffs last year, how did you feel the team lived up to expectations?

A: I believe we could have gone further this year. We didn’t play our best at the end of the season, and I think injuries contributed to that. Also, the four teams that beat us were all very good football teams.

Q: What was the community support like for the team?

A: Our community has always given us great support.

Q: Of your 26 years of coaching, have they all been at Northwood-Kensett?

Q: With Einertson and Yezek coming back, what’s your outlook for next season?