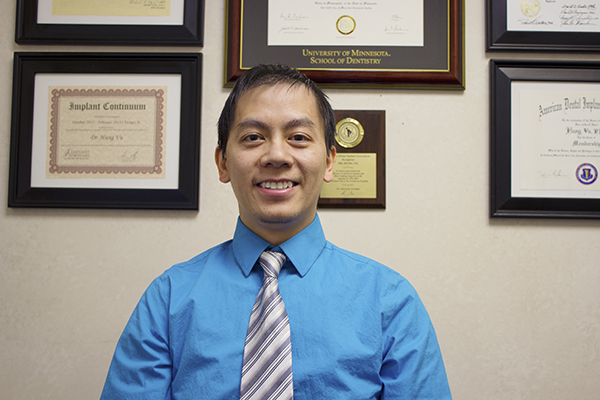 The dentist is in

Uptown Dental offers plenty of services to its patients, but something called Fastbraces is the newest addition.

Hung T. Vu is the owner and dentist at Uptown Dental. He has been in albert Lea for just over a year, and was a partner with Marko Kamel. Kamel left the office in May, and Vu has owned the business ever since.

Kamel used to do all of the orthodontics at Uptown Dental, but since he left, Vu took all of his cases. With the addition of Fastbraces, Uptown Dental now offers three orthodontic services.

Fastbraces is a new technology to Albert Lea. Vu said he’s been doing Fastbraces for just over a year, but the technology has been used for over 20 years. However, it has only recently become popular.

Unlike traditional braces, which can take about two years to fix teeth, Fastbraces can take anywhere from three months to a year.

Fastbraces use special brackets and wire to move the crown and root of a tooth simultaneously. It also claims to have minimal discomfort and retainer wear.

A procedure that is similar to Fastbraces that Uptown Dental also offers is Six Month Smiles.

Six Month Smiles is a cosmetic braces system that works well for adults who need to straighten out crowded or twisted teeth and teeth spacing issues, Vu said.

While Six Month Smiles may actually take four to nine months, it’s shorter than the two to three years that traditional braces may take, Vu said.

Six Month Smiles involve clear braces that only align the teeth that show in a smile. Vu said Six Month Smiles work for 80 percent of patients that are candidates for this procedure.

Uptown Dental also offers Invisalign braces. Invisalign braces are different than traditional braces as they look like a clear retainer. Patients get a new Invisalign tray every month and the teeth are slowly moved into position.

Vu said a computer determines how the teeth will move.

Vu, who worked in Big Lake for three years prior to coming to Albert Lea, said he enjoys orthodontics and cosmetic dentistry, but one area he is especially interested in is implant dentistry.

Vu called implants the “future of cosmetic dentistry.” In implant dentistry, a missing tooth is replaced with a titanium screw that is attached to the implant, which feels and looks like a real tooth, Vu said.

Vu said this is a better alternative to the traditional bridge, which requires drilling into the teeth next to the missing tooth.

In the past three years, Vu estimates he’s done hundreds of implants, and was trained in Chicago for implant dentistry. He has also done mission work in the Dominican Republic, offering free implants to those who need them.

In addition to the services Uptown Dental offers, Vu said the clinic also offers Spanish-speaking staff to translate, and any consultation is always free.

In the future, Vu hopes to reincorporate Botox to the list of Uptown Dental services.

Kamel used to do Botox, Vu said. After Kamel left the clinic, Vu said he’s been working on getting a Botox certification so the service can return to Albert Lea.