Funeral services for Violet D. Bos, 93, of Albert Lea will be at 2 p.m. Wednesday at Grace Lutheran Church. The Rev. Janet White will officiate. Burial will be at Hillcrest Cemetery. Friends may greet the family one hour prior to the services at the church.  Online condolences are welcome at www.bayviewfuneral.com. 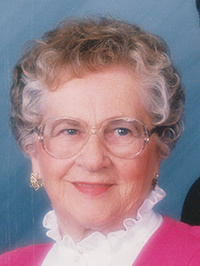 Violet Darlene Bos was born June 19, 1921, to August and Hannah (Jensen) Rogert on the family farm in Freeborn County. She attended elementary school in the Conger area and graduated from Albert Lea High School in 1938.

On June 24, 1940, she was united in marriage to Oscar Jordahl. The couple moved to Oklahoma City in 1942 where they lived for six years. Their daughter, Darlene, was born in Oklahoma City. The family moved back to Albert Lea in September 1946, and it was at this time that Oscar and his brother, Merle, bought what is now Jordahl Lockers & Meat in Manchester. They built a home in Manchester and both retired in 1973.

Oscar died May 6, 1993. Violet married William L. Bos Dec. 31, 1994, and lived in Hollandale. The couple spent part of their winters in Donna, Texas. William died Aug. 27, 2006. Violet moved to Senior Tower in Albert Lea where she lived until February of 2009, when she moved to Chanhassen to be close to her daughter and granddaughter, Julie.

Violet was preceded in death by her parents, husbands and brother, Alton Rogert.